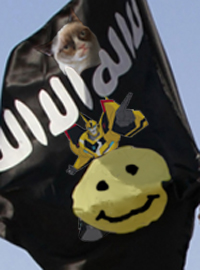 Having difficulty attracting new recruits, ISIS is working with an American marketing team to rebrand itself.
Related Topics

DAMASCUS, SYRIA – After suffering a series of recent defeats, the terrorist organization known as Islamic State of Iraq and Syria (ISIS) is looking to re-brand its image in hopes of bringing in new recruits.

According to senior ISIS leaders, recruitment of new members has slowed as the population of men between the ages of 16 and 25 has been depleted.

ISIS has hired image and marketing consultants from New York City and hope to appeal to both younger and older Muslim men and women around the world.

“We are not good at finding men and women who are old and who are young,” said ISIS Deputy Abu Ali al-Anbari. “But old and young want us to promise they will not be blown up and we can not promise them that. (Old and young people) are too concerned about not blowing up.”

One of the first changes ISIS is making is a change to their videos posted online. The group will start featuring more explosions, brightly colored text, slapstick comedy elements and people talking in funny voices.

“American devils make movies with explosions and almost naked women and everybody loves them,” said al-Anbari. “We will make videos for the internet that are like American movies but with no naked women because that is a crime against Allah and naked women must be destroyed! We already have many explosions. We will get American actor Shia Lebouf be in our videos. Everyone loves him. He is a good actor. We will also have men who get hit in the groin in our videos. Also cats. The people on the internet love both of those things. To make sure we recruit more children we will have a voice in our videos that makes lots of high pitched noises and says many stupid things that do not make sense. Children seem to enjoy noises and nonsense. But once with ISIS (children) will learn to appreciate much more – like blowing up. ”

To appeal to older men and women, ISIS will begin scheduling conference rooms across Iraq and Syria where men and women can come and register complaints.

“Our senior citizen population, people over the age of 30, are very interested in complaining,” said Abdul Hamid. “To bring these old men into ISIS we will give them a place where they can go and complain about everything. They can be there for as long as they need. We will have a fake person there that will look as they are listening to the complaints but there not be an actual person listening to the complaints. But it will appear that someone is listening and that is the important part. Once our new recruits are no longer complaining, they will be given a gun and told to begin shooting things that we tell them to shoot.”

“We think that these things will really help bring in a new crop of recruits,” said Akallah. “Especially the dental plan. People here don’t have much access to the dental industry. That’s very important here. The virgins are nice too but really, they give out virgins fire everything.”

ISIS has hired the marketing company DeSchutz, Griffen, and Kelper who has worked with several high-profile and controversial customers.

“We are use to dealing with high profile and, let’s face it, evil customers,” said DeSchutz, Griffen, and Kelper CEO Daniel Griffen. “But money is money. I would represent Hitler if he paid me. I have no soul. Also, I work for the Koch brothers so ISIS really doesn’t seem that bad in comparison.”