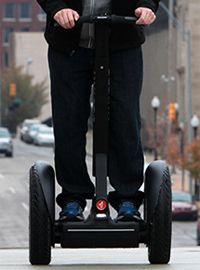 Kenny Drew is still showing off his Segway.
Related Topics

LONG BEACH, CA – Despite a steep decline in sales and popularity, local man Kenny Drew sill shows off his Segway at every opportunity.

Drew spends several hours a day riding his Segway along the beach front sidewalk near his home, stopping occasionally to tell passerbys all about his Segway.

Although he has not been asked directly about his Segway since 2003, Drew says he sees interest in “people’s eyes.”

“It’s kind of amazing that in the age of the smart phone that people really don’t know much about (Segways),” Drew said. “Most of the time they don’t even need to ask me about it. I can just tell by the way that they look at me on my pimp ride that they want to know every aspect of this dream machine. And I love to tell them about it. I mean how could I not like talking about the greatest marvel of human technology since the Fleshlight? Did you see this? Look what I can do on it. Cool, right? Check this out…”

Despite the fact that Drew loves his Segway, his friends and relatives are not sold on the technology.

“Have you ever seen a cool person on a Segway? No, you haven’t because no one looks cool riding a Segway,” said Drew’s sister Diana McGrenter. “Segway’s are the lamest mode of transportation that has ever been created. That’s why no one uses them anymore. Most sane people look at a Segway and think for a second ‘wow, that kinda looks cool” but they soon realize that it’s not cool, it’s impractical and dumb. Well, most people think that, but not Kenny.”

While there are no Segway sales locations in the greater Los Angeles area but Drew tells people he passes that, if interested, Segways can still be found online.

“Have you ever driven (a Segway)?” Drew said. “Holy shit, they are quite possibly the greatest thing that has ever been created. Seriously, I’m not fucking around here. The only thing that I can think that would even come close to feeling as good as riding a Segway is if you were to get a blow job while eating chicken wings and watching those ‘Transformers’ flicks. But even if I was presented with that option it would still be a pretty tough decision. I’ll be honest with you, it would probably be the Segway.”

Drew has recently been considering purchasing a Hover Board but says he doesn’t want to give up his Segway for “the newest fad.”

“Those Hover Boards are pretty cool, but I don’t know if they can possibly compare to my Segway,” Drew said. “I mean the fact that you can ride hover boards indoors is a big draw, but then again, there is the fact that there are so many videos online of people falling off their new hover boards and fucking themselves up pretty badly. I never had that with my Segway. I mean, I was pretty much a pro the second I set foot on it. Watch this… you can’t do this on a Hover Board. But we’ll see. I’m not sold on it yet, but they do make people look pretty bad ass.”