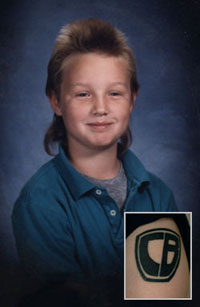 AMES, IA – Approximately 20 minutes after applying a temporary tattoo, nine-year-old Joshua Kelley went on what witnesses describe as “a thug-like rampage of destruction and complete disregard for his fellow students.” Kelley’s disruptive behavior continued until the tattoo had worn completely off, more than 24 hours later.

“The transformation was horrible. (Kelley) has always been a good student but when he put on that tattoo just before recess, it was like he was a totally different kid,” Arleen Jenkins, Kelley’s 4th grade teacher said. “He immediately went outside and beat up Collin… (Collin’s) the kid that plays with the girls. Anyways, he just kept hitting him and calling him ‘homo’ and ‘queen’ and none of us are real sure what the hell that was all about. All the girls just stood back and watched, almost as if they were excited by the ass whippin’.”

The tattoo, the logo of cartoon superhero Captain Baffo, came free with the fruit snacks Kelley’s mother packed in his lunch. Shortly after finishing his meal, Kelley went to the bathroom to apply the tattoo. He exited the bathroom without a shirt on and started flexing the muscles of his upper body.

“He came out and said he ‘felt weird and was ready to start some shit.’ I figured he was sick or something so I ignored it and told him to go play outside,” Jenkins said. “A short time later I heard the screaming and yelling coming from outside. By the time I got there Joshua had robbed seven students, beaten up three others and made sexually explicit remarks to six girls on the playground. He had also vandalized the jungle gym and defecated on the wall of the school.”

The events were particularly surprising to the school staff, who had only previously known Kelley to be a straight ‘A’ student who gifted beyond his years and was also said to be incredibly shy.

“That whole thing was just weird,” said Taft Elementary Principle Betty Lou Farrister. “We didn’t expect behavior like that from Josh… he’s a good seed. Willy Brekman is the kid you expect to do this type of thing. His parents are drug addicts you know, and I even heard his mother is a prostitute that will suck anything for 20 bucks. And I mean ANYTHING. But not Josh’s… his parents are good, honest, God-fearing, working class folk. You know, one time I saw Willy’s mom huffing spray paint out of a paper bag while her husband lay passed out in front of her with his god damned penis in his hands. There may have been something jammed in his ass but I really didn’t get close enough to know for sure. It’s true. It was right over there at the 7-11.”

Kelley’s parents have so far been unavailable for comment. They have however released a statement regarding the events and expressed their amazement and confusion about the situation.

“We can not believe our child could be capable of such atrocities. Things like this don’t come from white, middle class, boys. This is something that happens in the big cities. Not here. We have discussed the accusations with our son and have decided to sue the school for letting this happen, sue Jiminey’s Wholesome Fruit Snacks for putting the tattoo in their product and sue the state for not reacting quickly enough to stop my son from harming others and himself. Someone has to pay for this and it wont be us,” stated Ralph Kelley in the statement.

While Kelley has said he recalls little from that afternoon, he is not ruling out the possibility of another tattoo in the future.

“The whole thing was just, I don’t know, rather exhilarating, to put it into terms that you laymen could understand,” Kelley said. “The sensations I discovered could only be called euphoric, or even orgasmic. I felt an overwhelming surge of power and authority. Invincibility if you will. I can honestly say that when I am old enough to procure a fraudulent identification card, I will certainly hire the services of the best tattoo artist in town to get the impression of an angel with large mammories pleasuring herself with a cross.”