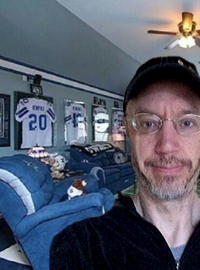 Jared Waterton says he does not feel comfortable in his Dallas Cowboys themed man-cave.
Related Topics

SAN ANTONIO, TX – Local man Jared Waterton says that he is no longer comfortable in his football-themed man-cave.

“I like the idea of having a room all to myself but… I… just don’t like being in my man-cave,” said Waterton. “(The man-cave) is just… I don’t know. It’s just not me anymore. I’m not sure it was ever me. The whole room is just football stuff. Football carpet. Football lamps. Football wall decorations. Football recliners. Football remote. A little football mini-fridge. A football ceiling fan. Even the door knob is a football. It seems to me now, that that may be entirely too much football.”

The man-cave is decorated solely in Dallas Cowboys decorations despite the fact that Waterton describes himself as “not the biggest football fan.”

“It’s not like I dislike football, I am from Texas, it’s just that football isn’t really my thing,” said Waterton. “But I’m not real sure what my thing is. And I’ve never been to a Dallas Cowboys’ game and I don’t know any of the players. I mean, is Dan Montana still their running end? I don’t know. So having a room dedicated to the Cowboys just doesn’t seem right. But I don’t know. My wife says she likes it and wishes I’d spend more time in there.”

According to Waterton, he has felt more and more uncomfortable in his man-cave as the years have passed and no longer spends time in the room, opting instead to sit in the backyard, staring at a pile of rocks.

“I feel really bad because Cheryl spent a lot of money to make it perfect, but it’s just kind of depressing,” Waterton said. “Recently, that pile of rocks in the back has been my go to happy place because there’s just so much beauty in the way that the light dances off the speckles in the rocks. It’s pretty mesmerizing, really. And also, those rocks don’t judge me.”

Waterton was convinced to decorate a room in his new house by his father-in-law and wife who had watched a man-cave episode of a home-improvement TV show.

“We were watchin’ one of them TV shows where the couple goes in and does some decoratin’ in houses and they had this one episode where they made a room that was all decorated with NASCAR stuff and they called it a man-cave and I turned to my daughter, Cheryl, that’s Jared’s wife you see, and I said to her ‘you see that? That husband of yours needs a man-cave.’ Between me and you, he needs to be more of a man,” said Waterton’s father-in-law, Herbert Stretly. “So we, Cheryl and I you see, we decided that Jared needed a man-cave and I thought football was a good manly thing for him. And since the Cowboys are God’s team there was really no other option than to do up his man-cave with Cowboys stuff.”

When Waterton and his family moved in to their current house six years ago, Waterton wanted to have a room that was his to decorate and that he could use as an office and personal space.

“I like being alone,” said Waterton. “So when we moved in to this huge house that my wife wanted I asked if I could have a room to myself and she said I could as long as it was in the basement. She said I could do whatever I wanted in that room and that she didn’t care but then she and (Herbert) bought me all this Cowboys stuff and hung it up and now… I don’t know.”

Although he is uncomfortable in the room Waterton says he has no immediate plans to make any changes.

“If I changed all the things in my life that made me unhappy or uncomfortable I wouldn’t be living in this house with my wife and my kids,” said Waterton. “Sure, I’d like to just rip all that Cowboys’ stuff out and maybe just replace it all with that pile of rocks over there since they really get me, you know, but… I guess I’ll just leave it alone. Everything’s better if you just leave it alone. All alone. Everything.”