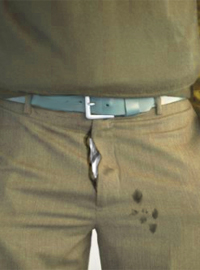 OnlyFlyPees, pants designed to be worn with the zipper down and stained with urine will hit retailers across the country this month.
Related Topics

NEW YORK, NY – A new line of pants will be hitting stores later this month that will appeal to a large group of males from all walks of life. The pants, which come with an always open fly and permanent urine stains, are expected to be huge sellers.

The pants, marketed as OpenFlyPees, were developed by the same designers behind the Untuckit shirts, shirts designed to be worn untucked.

“The guys behind Untuckit turned an idea that sounds just dumb and totally unnecessary in to something real that real men can buy. So why can’t we do that same thing with pants?” said OpenFlyPees Marketing Manager, Dan Rabbers. “Untuckit said ‘hey, there is a market for shirts made for short guys that think not tucking a shirt in to their pants is somehow cool and necessary.’ And so we think there is a market for guys that are kinda gross that forget to zip their pants and that get piss all over themselves every time they use a urinal. Probably a lot of the same dudes.”

The pants will come in a variety of sizes starting at size 40 waist. And while the sizes available vary, the pants will initially only come in khaki color.

“Let’s be real, guys that are in shape and care about fashion are not going to buy these pants. These pants are for people that have almost given up but aren’t quite ready to just wear sweatpants all the time,” said Rabbers. “But despite the fact that these guys have almost given up, they still have to get up out of their recliner and go to work. That’s where our pants are perfect. These pants say ‘I may not give a shit about how I look, but I’m still going to go out in to the world but only because I have to.’ It’s not like these guys go out every night trying to get some stank.”

The pants were developed by Henrich Zasterburg and are produced by Hagar.

“I, like almost all men, forget to zip up my fly all of the time and I also get peepee on my pants when I use the restroom,” said Zasterburg. “So I decided to turn those two embarrassing things in to a fashion. And one thing I would like to be clear is that the stains on these pants is actual urine. My urine. I have personally peepeed on every single pair of OpenFlyPees pants. Sometimes more than one time. And sometimes not just peepee. But that’s neither here nor there.”

Although there are line extensions planned, Hagar and Zasterburg are waiting to see how OpenFlyPees sell.

“We’d obviously look to expand the available colors,” said Rabbers. “And one thing we are looking at is a new type of fabric that smells… well, it kinds smells like a fart. That’s something that was high on our market research – these men fart a lot and it makes them a little self-conscious so if the pants always smelled like farts then they can fart in the pants and it wouldn’t be a big deal because the pants already smell like farts.”

OpenFlyPees pants and Untuckit shirts are examples of a new fashion craze targeting Middle-age white men with tremendous physical insecurities and a desire to be seen as normal.