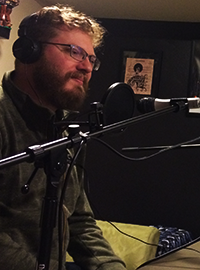 Podcaster Cameron Gluick says his friends have still not listened to his podcast even after repeated reminders and requests to do so.
Related Topics

AUSTIN, TX –Despite numerous reminders of its existence, friends of local man Cameron Gluick have still not listened to Gluick’spodcast.

“Is (Gluick’s) podcast the one about the Nintendo games? No? Is it the one about the apocalypse? No? What is it about then? Cartoon characters? Oh yeah. No, I haven’t listened to that yet,” said Gluick’s friend, Cadence duClerc. “There are a lot of podcast. So… no, I haven’t listened to it. I will. Maybe. Someday. But I don’t really listen to a lot of podcasts. I mean I would probably listen to a podcast if it was actually something that I wanted to hear about, so, yeah. I might get around to it, someday.”

Even though Gluick has several friends and by all accounts is a well-liked person, very few people he knows have listened to his podcast.

“I started doing this podcast a couple times a week in March of last year but my friends… my friends still haven’t listened to it,” said Gluick. “Even some of my closest friends haven’t listened. They all say they will but then they don’t. I don’t know why. Not even my family has listened to it. Sure, they say they have but I know they haven’t. Just last week I tricked my brother into admitting that he hasn’t listened. I started talking about Jabberjaw and he agreed that I put him too high on my list. Well guess what? I haven’t even talked about Jabberjaw yet. So basically, my brother lied right to my face.”

While most of Gluick’s friends are supportive of Gluick producing the podcast few have actually made an effort to listen to the podcast.

“I think it’s great that he has a podcast and it’s cool that he’s out there, you know doing it, but… Jesus. Do you know how many people I know that have a podcast,” said Gluick’s best friend, Kyle Bleeker. “Almost every single person I know has a podcast. On the way home today someone stopped me on the street and asked if I wanted to be on their podcast. I literally can’t listen to all the podcasts that are made by people I know. And well, I guess I don’t really want to either. Who wants to listen to an hour long podcast about a videogame you’ve never heard of? Not this guy.”

The Gluickast Hour has an average listenership of seven – most of which are Gluick himself.

“My (listener) numbers are ok,” said Gluick. “I usually end up with 10-15 listens per episode. Granted five of those are me and a couple are my parents. But that means there are at least a couple people out there listening, right? I’ve made 49 cents from advertising so far. That’s pretty cool. I’ll probably put that towards a Facebook ad or something. Do people use Facebook still? I don’t. But maybe other people do?”

Despite the fact that no one is listening to his podcast, Gluick intends to keep recording it for the foreseeable future.

“You know, things usually don’t start off super popular. They take a while to build a following,” said Gluick said. “Do you think Joe Rogan Started off at the top of the charts? Kevin Smith? No. At least I don’t think they did, I don’t listen to other podcasts. Anyway, people will come around soon, and then I’ll be making all that sweet MeUndies and Casper Mattress money. I just wish my friends would listen to it like they say they will.”