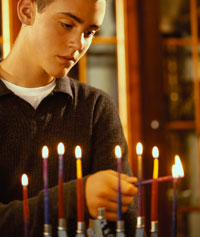 Jewish leaders have agreed to extend Hanukkah to a total of 38 days.
Related Topics

NEW YORK, NY – Years of debate and protest came to an end Saturday as Jewish leaders announced they have decided to extend the Hanukkah holiday by 30 days. This change will take effect with the beginning of next year’s Hanukkah observance and it will make Hanukkah the world’s longest holiday at 38 consecutive days.

While a coalition of hardline Hasidic Jews are upset with the decision, some Jews are welcoming the change and the chance to get more presents.

“Christians are always flaunting their holiday and how they get a lot more presents than we do. We are sick of dealing with all the religious aspects of our holiday and I for one am really looking forward to just forgetting everything and just concentrating on what I’m getting tomorrow, just like the Christians do,” said Joeseph Weisteine. “I know more than anyone else the younger generation are really happy about this change. I do wonder how the hell they are gunna make a 38 candle holding menorah, though. That might be a huge fire hazard but oh well, all the presents are worth it.”

“I am so happy with this. I almost pissed my pants. 38 presents! Can you believe that? Now instead of getting next to nothing compared to my Christian friends I can get more than them. This just is so friggin’ incredible. I mean with the whole bar mitzvah thing and now this… my life has reached its peak. Shalom!” said 12-year-old Abraham Holstein.

A council of Hasidic Rabbis have been debating the change for 10 years. According to a spokesman for the group the decision was taken very seriously with all sides considered. The final vote on the holiday change stood at 17 for with 13 against.

“This is not what we are about,” said Wayne Nevele. “We can’t just up and decide to change one of our beliefs because we feel like it. We aren’t Mormons for crying out loud. It has been this way for hundreds of years and with all the persecution we already have faced because of our beliefs, changing them so we can get more presents is unacceptable – it’s down right meushuganna!”

“Well, Judaism should be more responsive to social change,” said Motel Lewiston, spokesperson for fringe group Jews for Jesus. “Every great religion should serve the needs of the people, just like Jews for Jesus will as soon as we wrest control of Christianity back from those word-perverting paganistic Greeks For Jesus.”

Hanukkah, also known as the festival of lights, is the historic remembrance of the rededication of the temple in Jerusalem after a period of Syrian occupation. The eight days of the celebration each commemorate a day the lights in the temple stayed lit despite a shortage of lamp oil. Historians are still debating what to make of the Hasidic Rabbis’ decision, but the council seems confident in the unassailability of their pronouncement.

“Ah, hellfire,” said Rabbi Laban “Tex” Goldstein, “After what the Mormons did with the Mountain Meadows Massacre, it should be apparent that historical facts are moot and hardly even academic in regards to any self-respecting post-modern religion. If we say the rededication of the temple lasted for 38 days, then it did, Goddammit!”

Christian and Jewish retailers alike applauded the decision, while the Vatican announced it would review plans to extend Lent to 302 days.