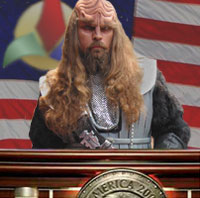 L'leB AhiKar, the new Senator from Minnesota, celebrates his election day win with a speech to his supporters.
Related Topics

WASHINGTON, DC – With faith in their government at an all time low, the American people have elected a new party to take lead of Congress – The Klingon National Assembly. This marks the first time in the history of the United States that a third party, let alone one consisting entirely of a violent alien race, has been a majority in either the House of Representatives or the Senate.

“DaHjaj’oH QaQ jaj Daq Hegh,” said L’leB AhiKar, the new Senator from Minnesota. “Oh, I’m sorry, I forgot that you simpletons speak a primitive language. I simply said ‘Today is a good day to die.’ And it is a good day, for now that we Klingons are in control of your pathetic government, this puny world will feel the wrath of the mighty Klingon Empire!”

The Klingons, late entries into all congressional races, won with landslide victories in every state except Kentucky. The people of Kentucky inadvertently elected a packet of cigarettes.

“Now that we have control of both the House and the Senate, we will be unstoppable,” said newly elected Florida Senator Nek’raD DaHQ. “Our supremacy was not as complete as we would have liked, but we feel that Senator Marlboro from Kentucky will be compliant in our plans or he will be crushed, just like we crushed the United Federation of Planets. All will feel the wrath of the mighty Klingon Empire!”

The KNA platform was a simple one with only one issue of focus – destroy all races in the galaxy that are not Klingon.

“When you look at it closely, (the Klingons) won on simplicity,” said CNN’s Election analyst Jared Manning. “You really can’t blame the country for respecting that. I mean there was no flip-flopping on the tough issues. They knew what they wanted, they told us what they wanted and now they will do what they want. Really, the Klingons are a breath of fresh air from all the crap that we’ve had to put up with from elections these past several years.”

According to KNA Party Chairman Teno’Ktik, the KNA will move swiftly in restructuring the House and Senate into more organized and efficient governing bodies.

“The first thing we will do is eliminate the entire Executive Branch,” Teno’Ktik said. “We will take your President Bush and his entire staff and pit them against each other in the Great Arena, and the victor will be allowed to live the rest of their lives in slavery. Of course this will take time, as we will need to draft the appropriate bills to do this. The rest of the government will be given a nice severance package. But hear this, no matter how nice the severance package, all will feel the wrath of the mighty Klingon Empire!”

Republicans and Democrats, both reeling from losses, have formed a federation to stop the advancement of the Klingon agenda.

“The results of these elections will be tested in court, you can bet your ass,” said House Speaker Dennis Hastert. “The Klingons will take us into wars that we shouldn’t be in just to benefit themselves and their disgusting view of the new world order and no, I don’t see any correlation to the current President and his staff.”

President Bush has met with Teno’Ktik to discuss the new directions Teno’Ktik would like to see the country move, however Bush has made it clear that he will Veto any and every bill sent his way that does not agree with the his neo-conservative views.

“We, the Klingon, are not worried about your Bush,” said Teno’Ktik. “He will soon see the way of the Klingon. But truth be told, Klingon and Conservative politics are very similar so we do not expect much resistance in our plans.”

In Utah, Klingon JanZoQ Worq, won a Senate seat by 199,000 votes. Utah voters connected with Worq’s strong family values and desire to spread the Klingon way to other countries.