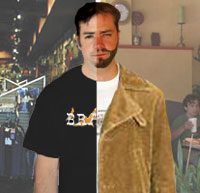 “For me, it was just a matter of timing,” said Samson. “I just grew out of the whole emo thing and the indie music scene was a natural progression. I’ve just gotten older and I didn’t feel like being depressed all the time for no reason. Once I turned 22, emo just seemed so… contrived. I can use that word now that I’ve joined the hyper-illiterate indie scene. I can use a lot of new words now… like transubstantiate and penultimate.”

Emo music, known for its emotionally driven lyrics and dark musical tones, has become popular over the last several years with the success of bands like My Chemical Romance, Fall Out Boy and Panic! At the Disco.

“I really liked emo when it wasn’t so popular. Before all these new bands came around,” said Samson. “I was totally into the Promise Ring and Sunny Day Real Estate and even to a lesser extent The Get Up Kids. But these new bands, like Panic! At the Disco, they’re just irrelevant and ostentatious.”

The change to indie fan required a physical change as well as a change in music listening habits. Samson had to refrain from using eye-liner, stop dying his hair black, gain weight, grow a beard and change his wardrobe.

“I was able to keep some of my clothes, but the bulk of my wardrobe had to be taken to Buffalo Exchange,” said Samson. “Luckily Christmas just passed, so I was able to get myself a new wardrobe. I got a new scarf and a shirt with the former Soviet Union logo. You know, now I pretty much have the look down. I did keep one of my Braid shirt, because, you know, it has sentimental value. I never saw them live, and had to buy the shirt off the internet, but it still means something to me.”

The trend of emo fans moving on to indie music has become common place in the last several months. Insiders credit the movement to the fact that today’s so called emo bands suck.

“All of these bands these days that call themselves ‘emo’ aren’t ‘emo’ when compared to the origin of the scene,” said Rolling Stone Editor in Chief, Dan Roswell. “These new bands just took a label, a label that most of the original ‘emo’ bands rejected, and ran with it. These new bands, like My Chemical Romance think that the more guy-liner they wear, the more emotional they are. That’s complete bullshit. On the other side of this discussion, the indie music coming out of Portland and New York is some seriously kick-ass shit that I would totally get into if I wasn’t so old.”

Samson now listens to bands like Stand On The Feet of Giants, John Vanderslice and The Decemberists and hangs out at coffee shops and bookstores.

“The new JV, that stands for John Vanderslice, album is truly transcendental. I mean, well… actually, I don’t know what that means but it really sounds good,” said Samson. “I know The Decemberists new album is technically on a major label and therefore not indie but it’s still really good and my new indie friends tell me that they were able to maintain their indie sound and attitude despite having money.”