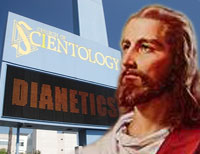 LOS ANGELES, CA – Friends and family of Jesus Christ are confirming recent internet reports that the Christian icon has converted to Scientology. The shift in religious philosophy has come as a shock to Christians all over the world.

“How could (Christ) do this to us?” said Christian Jenny Werner. “I mean… if he thinks Scientology is the real deal… then it has to be right? I mean… he’s the son of God so he’d know if that other religion was right, right? I’m so confused.”

Although Christ himself has not commented on the rumors, those closest to him have begun telling media outlets that the Christian savior made the switch after a recent trip to Seattle.

“We were up there to catch a Death Cab for Cutie concert and we were walking down by Pike Place Market and some old lady came up to us and asked us if we wanted to take a personality test,” said Christ’s friend and bodyguard Lamont Gerr. “Jesus went through the whole deal. He sat there and listened to everything the Scientologists said. After a couple hours he told me he was thinking about going to one of their centers for more counseling. What could I say to the guy? I’m not gonna question him even though I think that Scientology shit is bull.”

Scientologists are already touting the acquisition of Christ, calling it the single greatest acquisition in the history of religion.

“We are so stoked to have this guy on our side now, it’s just, it’s just tits, if you’ll pardon the expression,” said Jake Streeter, Public Relations for the Church of Scientology. “I mean, put it this way. It’s like if the Joker became Batman’s new sidekick or if Patrick Roy joined the Detroit Red Wings. Or hell, it’d be like Gargamel painting his skin blue and calling himself a Smurf. These things should not happen, but here we are. It’s simply amazing. If I hadn’t cut off my penis for the church, I would totally be sporting wood right now just thinking about this.”

Many Christians have themselves begun to wonder about Scientology however, many have begun to lash out at the religion saying the Christ has been brainwashed.

“I just can’t believe that (Christ) would do something like this, it’s just so not like him,” Gabriel Ramirez said. “I mean, they had to do something to him. A lot of movie stars are part of that cult right? And movie stars are all on drugs, so they probably drugged him. Maybe that’s not even Jesus anymore. Maybe the Scientologists have the real Jesus locked up in a room somewhere and they have a car battery connected to his testicles and every time Jesus tries to call for help, they shock the shit out of his balls. I know I probably shouldn’t be talking like that, but those Scientologists are crazy, you just don’t know what they’re capable of doing.”

“Let’s look at things logically shall we,” said Scientologist John Travolta. “Is believing in some giant, evil space alien that flies people around in huge airplanes only to blow them up by volcanoes anymore ridiculous than believing in a big, all-powerful guy in the sky that no one can see or talk to but controls every aspect of life? No it’s not. God is stupid and Thetans are awesome.”

Although confirming that Christ has made the switch to Scientology, some think the recent events may be nothing more than rebellion against his father.

“What if he’s just going through a rebellious phase?” Werner said. “You know, like a lot of kids do when they’ve had religion crammed down their throats all their life. Yeah, that has to be it. He’s pissed at his dad, so he’s running off to worship aliens.”