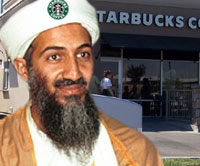 KABOL, AFGHANASTAN – Those closest to him are reporting that Al-Qaeda founder Osama bin Laden may be retiring from terrorism at the end of the year. Over the past couple years, bin Laden has expressed growing interest in pursuing other hobbies and possibly opening his own coffee shop in the mountains of Pakistan.

The past several years have kept Bin Laden from pursuing many of his interests outside terrorism as he has had to remain in hiding.

“Terrorism has been good to him,” said Aslan Sharid. “But even when you are really successful at something for a long time you dream of other things. You can’t be a terrorist all your life. Osama, he dreams of a quiet life with his family. He talks of opening a Starbucks franchise out here and with power his name holds… that coffee shop will be the most busy Starbucks in all of the world.”

Bin Laden’s family has been sending him real estate guides for housing and store fronts at his request.

“We have found (bin Laden) some really nice locations and some great houses,” said bin Laden’s brother Rasha. “My wife found him a very nice place in suburbs of Kandahar. It is, as you say, a fixer-upper, but we think it would be good for him to build something that is not an army. He has living in caves for the last several years. Compared to caves, this home is a palace. The only thing missing are all the virgins. But (bin Laden) is a very handsome man, I am sure it will take him no time to get his home full of women.”

Although not stating it directly, in his last video tapped message to his followers, bin Laden alluded to a possible change in his life coming soon.

“All the Zionists and all of the West will be obliterated under the might of our people, as I watch from behind the glass of the green and brown mermaid,” Bin Laden said. “I will provide strength, insight and gourmet coffee to my people as we continue the fight.”

Aside from the possible Starbucks, it is being said that bin Laden has his sights on relaxing during his retirement.

“He has got his sights set on a lot of little thing to take his mind off of everything,” Sharid said. “It sounds crazy, but for some reason he really wants to build a small boat in a big bottle. I do not know why, it sounds kind of homosexual to me, but he wants to do it. The only problem is the company that makes the very nice boats in a bottle is an American company, and you know, fuck America and all that.”