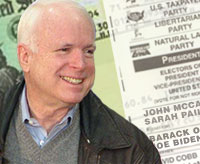 WASHINGTON, D.C. – In the wake of the stagnant economy and the upcoming presidential election, current President George W. Bush has announced a new economic package that will give every American that casts a vote for John McCain a $1,000 tax refund check.

“I believe in McCain… well, that’s not entirely true, but I believe in him enough to make sure he wins (the Presidential election),” said Bush. “That Obama guy – he kinda scares me. I don’t know what it is but when I see him I just see a bunch of dark energy from him. Get it? Dark? But with McCain, all I see is white. I mean right. Wait… no, I was right the first time. He’s definitely white. And old, but that’s neither here nor there.”

Exact details of the plan have yet to be worked out, but many prominent Republicans are hard at work drafting the plan.

While elections in the United States are confidential, Bush’s refund plan will ask McCain voters to prove that they did in fact vote for McCain.

“We’re coming up with the exact rules for this program as we speak,” said Utah Senator Orrin Hatch. “We can’t have the whole world running around, saying that they voted for McCain when they didn’t. That would be ridiculous. But we’ve set up a number of ways in which a man can prove they voted for McCain. One thing that we’ve come up with is to have a needle there at the polling place so that when one votes for (McCain) they can actually sign their name in blood. Now that might not fly in the end, but if you ask me, it’s a damn good idea.”

According to insiders, Bush’s refund plan really only has one stipulation; the caveat that McCain must win the election in order for the checks to be sent to voters.

“Of course (McCain) has to win. You think that Obama fella will let anyone have any money?” said Bush. “I’m not sure what it is about that guy but I just don’t see him letting any American have money. I guess you could say that I kinda see him as a black hole. Get it? Black? Where, when I look at McCain, I see a white angel of mercy giving money to those who need it… and that vote for him.”

Even though the plan is only in the initial stages of development, Democrats from around the country have already come out in protest against the idea.

“That is the most ridiculous thing that I’ve ever heard,” said Democratic House Speaker Nancy Pelosi. “I know that every election since Grover Cleveland has been ‘bought,’ but this is carrying things a little too far. You know what, no, we’re going to fight this. If Barak Obama wins, I will see to it that every American who votes for him get’s two thousand dollars. That’s right, double what those stingy Republicans will give you. Better yet, when Obama wins and fixes the economy, that two grand is going to seem like so much more. So get out there and vote for Obama. Hell vote twice and get two checks! We don’t care! (John) Kerry is rich, he can afford to front us some of the cash.”

With the election only a two months away, President Bush hopes to have his plan settled and in effect by the end of September.

“If we get this done in the timeframe that I want, we’re looking at about six months to get the word out there before the election,” Bush said. “That’s the goal anyway. We need to get this out there in the hands of the hard working American public so that they can figure out what their going to spend their thousand bucks on. Me, I’m going to buy a kick ass monster truck. It’s going to be sweet. Then I can take my monster truck over to old what’s his name Obama’s house and spray mud all over his house. Then I’ll be all like ‘he he, take that ya loser!’ It’s going to be awesome.”