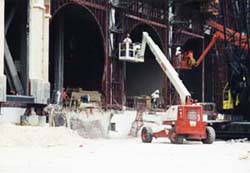 LAS VEGAS, NV – Mandalay Resort Group released plans and designs this week for a new, extravagant casino along the Las Vegas strip called Jesus Christ!: Hotel and Casino. Modeled after ancient Jerusalem, the hotel and casino’s theme will be that of Jesus’ life, most specifically his death.

“I really think it is about time that we brought a casino of this nature onto the Vegas strip. Everyone is walking around here gambling, drinking and fucking all the time, I think it will be good for people to have something here to remind them of what is really important,” said Steve Walsh, devout Christian and the man behind the idea.

The main feature of Jesus Christ! will be the live action/animatronic re-creation of the crucifixion. Along the street, in front of the main building, visitors will be treated to “a show of Biblical proportions” where they can witness Jesus die every hour, on the hour. The show’s developers promise more action than the Treasure Island pirate boat and more pyrotechnics than the volcano at the Mirage.

“It’s going to be spectacular,” Walsh said. “And that’s only the outside. I am really fucking excited about this. Inside we’re going to have all kinds of cool things to see and do. You can have dinner at the Last Supper Buffet or any one of our other fine cafes and bars like the Mary Magdalene Café and the Bread and Wine Bar. And we’re even going to have people walking around like the 12 Apostles and the man himself. And wait till you see the cocktail waitresses, we got them these cute little outfits, just like the peasant girls wore back then. The only difference with our costumes is that the girls will be showing off a lot more cleavage.”

The casino will host more slots than any other casino on the strip along side hundreds of gaming tables. The casino is already taking names for the 12 Apostles High Roller Club, which will offer special discounts to its members.

“Not only are we going to have the most slots but definitely the loosest slots than anywhere else in Vegas, way more than any place in that shithole Atlantic City,” Walsh said.

Aside from the gambling aspect, there will be several family oriented activities as well. Pontius Pilot’s Playground will give parents the chance to enjoy gambling as their kids play video games. There will be a motion ride, titled Jonas’s Wild Ride, and a roller coaster called The Ascension. Designed to be much like Six Flag’s Superman ride, the coaster will shoot straight up a 20 story tower at 120 mph, before zooming back to Earth. Visitors will also have the chance to be married in the Little Bethlehem chapel by a Jesus look-a-like.

“We want our visitors to feel like Jesus is really right there with them, whether they are sitting down at slot machines or walking hookers back to the rooms for a 50 dollar blow and fuck,” Walsh said. “God damn am I excited about this project. We just secured Gallagher to play our opening weekend in the Resurrection Theatre. Now tell me that isn’t cool as hell. There is so much planned. This is going to be the biggest casino we have ever done and honestly, Jesus deserves only the best. You just can’t half-ass stuff when you are dealing with a man like Jesus. We are planning a lot of special things, but some of them will have to wait until we open on Easter next year.”