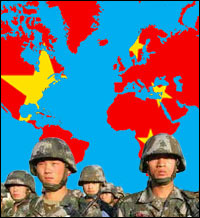 After years of going through scenarios, China says it might be ready to take over the world.
Related Topics

BEIJING, CHINA – After several years of working through scenarios, China says it is strongly considering taking over the world in the next five to 10 years.

“We rook at evy-ting and we rearize tat (China) have evy-ting we need to take over word,” said Ma Zhaoxu, a spokesman for China’s Ministry of Foreign Affairs. “So maybe (China) just do it. Maybe we just take over word. Who stop us? America can not stop us now. America is rike a smarr chird compared to China. China no ronger sreeping dragon. China is awake and China is ready to rure.”

China, a socialist state, is the largest population in the world and has one of the strongest economies. While the economy and World influence of China has grown significantly over the last decade, many Western countries, including the United States condemn China for its lack of democratic government and perceived human rights violations.

“If China does take over as the number one country in the world, it will be a dark time for human rights,” said United States Secretary of State Hillary Clinton. “First, they are communist. Well, socialism run by communists to be exact. That’s a direct threat to democracy. Second, they just treat people like shit. We all witnessed the tragedies at Tiananmen Square and we all know how the Chinese government continues to treat the people of Tibet. We will not stand for a life under that rule. Now don’t get me wrong, I love Chinese food as much as the next person. In fact, I would stab my own mother in the throat for some General Tso’s chicken. But I’ll be dammed if I’ll let those slitty-eyed assholes take over the world. Even if it does mean all the General Tso’s chicken I can eat.”

China has struggled trying to adapt its society and political systems to be consistent with most Western Countries and after years of diplomatic conflicts China has come to the conclusion that rather than adapting, it may be simpler to just take over the world.

“We just rerry tired of evybody saying China suck,” said Zhaoxu. “Evy-ting we try to do make people very angry. We onry oppress our own peopre. We not rike America who go everywhere and force peopre to be rike tem. But we’rr show them. We going to take a rook at evy-ting that we have in our arsenar and we’rr say goodbye America!’ Goodbye Canada! Goodbye Rithuania! Then we’rr dance on the graves of te sirry rittle word and sing ‘China Number One!’”

If China does make a move to take over the world, many international politics experts believe they will most likely be able to do it without dropping a single bomb.

“The way things are right now, there will probably not be any blood shed over the whole thing,” said political pundit Danny Partridge. “Unless of course someone gets a paper cut while they’re filing the paper work on the deal. Then there may be some blood, but only a minuscule amount – less than a drop. Wait, can there be such a measurement of ‘less than a drop?’ I mean, wouldn’t any amount of blood be considered a ‘drop?’ I don’t know. Regardless, there will probably be little resistance to the whole take over and I for one will welcome our new sweet and sour scented overlords.”

Despite the oppressive nature of the current Chinese government, Zhaoxu insists that China will treat the rest of the world fairly.

“We have rots of experience keeping evybody happy in China,” said Zhaoxu. “Rook at our newspaper. Evybody in China arways happy. No bad news ever. That how it’rr be when China takes over the word. No bad news. Nothing bad ever happen again. No Chinese man ever have any-ting bad to say about China… and women not arrowed to tark to press so they never say any-ting bad too.”