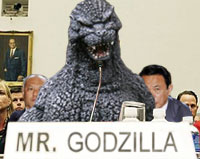 Godzilla has denied any involvement in the recent earthquake that devastated Japan.
Related Topics

TOKYO, JAPAN – In an effort to avoid further public outcry, Godzilla held a press conference earlier this week to deny any involvement in the recent Japanese earthquakes and tsunamis.

“In the weeks since the disaster, my name has been thrown out a lot as being responsible for this terrible, terrible disaster,” said Godzilla. “I want to say, right here, right now, in front of god and the world, that I had nothing to do with the earthquake and the ensuing tsunami. I know that I have had my conflicts with Japan in the past, but really, I would never cause destruction and loss of life of this magnitude. I’m more of a stomp, stomp, and breathe a little fire kind of guy. I would never cause this much damage. Well, I would, I mean I have, but you know, that was different. I was a lot angrier back then, I was really immature.”

On March 11 an 8.9 magnitude hit Japan and caused a massive tsunami that hit the countries Eastern coastline. At press time more than 21,000 Japanese citizens have been killed or injured.

“I have never killed humans on purpose. If any humans died during one of my… episodes then it was… not my fault,” said Godzilla. “My previous attacks were the direct result of provocation by the Japanese government. Over the last few years, we’ve been working on our relationship. Sure it’s been up and down, you know, with a few rampages, but we’re working on it. It’s a process. But the thing is we’re working on it. I’m not in a position where I’m just going out and smashing shit all willy nilly. Unless I’m minding my own business and I’m attacked by a nuclear weapon… again.”

Despite Godzilla’s assurances, many in the Japanese government are convinced he was at least somewhat responsible.

“We no berieve that Godzirra is terring the truth,” said a high ranking member of the Japanese military, who asked to remain nameless. “He says this arr the time! ‘I’m Godzirra, it’s not my faurt that I destroy Japan.’ But it’s arr burrshit. He knows exacry what he’s doing. He’s just a big asshore. A big asshore that kirrs peopre and destroys rots of buirdings. He kirred my dog the rast time he went on one of his rittle attacks. Fuck him. Fuck Godzirra! We’rr get him!”

To prove his sincerity, Godzilla has announced that he will be pitching in on the relief efforts.

“I’ve talked to a few of the guys, and we’re going to help out as much as we can,” Godzilla said. “I’ve convinced Mothra to fly in supplies to some of the more remote places and I’ve got Ultraman to do that ray thing that he does to clear out some of the debris. I’m really trying here. I want to be a good guy, but I swear to god, if those damn military guys try to fuck with me, I will fuck with them. I may be here to help but I also have my principals.”

Most Japanese citizens are willing to accept Godzilla’s offer of help but they remain skeptical and hope that the Japanese military is ready if Godzilla becomes violent.

“We shourd keep an eye on him. Not ret him hurt us anymore,” said Aiko Cho. “If he breaths fire even once we shourd shoot him with tanks.”

Godzilla isn’t real to begin with. And, if he was, then i would say that he’s full of shit. Hey Godzilla, if you were real, i would tell you that the world has weapons that would wipe your ass. By the way Godzilla, if you fuck with the U.S., we will fuck with you!!!!!!!

Readers beware! It is altogether unclear which news service was sourced by The Scoop for this article, but it is some kind of elaborately staged hoax! They print the “f” word…that’s right, the fucking “f” word…Reuters, AP, etc. never do that. Also, the sign identifying Godzilla during his testimony in the Japanese Parliment is IN ENGLISH! Not Japanese. In addition, the piece quotes a “Japanese citizen” and reports their last name as “Cho.” This is NOT even a japanese name! Finally, “Godzilla” isn’t a real name, just a bastardized version of the real name of The King of Monsters, which should have appeared, in Japanese mind you, in the lead photo: Gojira!!! Pronounced “go jeer ah!.” This story is some kind of trickery!

no the US would not kick godzillas ass cos he feeds off nuclear energy duh!!

poor godzilla has again been cruelly misrepresented by the media!