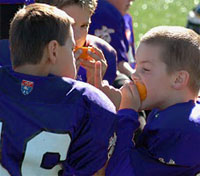 LAKEWOOD, CO – As the deadline to make a deal came and went last week, Kevin Garmin, the Commissioner of the Jefferson County Youth Football Association (JCYFA) has announced that the league will be locking out the players for the upcoming season, effective immediately.

The lockout comes after negotiations between the league and the Jefferson County Youth Football Players Association on a new collective bargaining agreement (CBA) broke down.

“(League officials) really did not want things to go like this, but the players have really tied our hands here,” Garmin said. “It is really a sad thing, especially for our fans, but there was nothing we could do. We tried to deal with the players, but they just wouldn’t budge. They were totally being assholes about the whole situation. I can tell you that I was sitting right across from (Players Association President) Billy Tanner and he gave me a look like he’d just raped my mother. I was trying to get a deal done and he just sat there, refusing to listen.”

At the heart of the disagreement between the League and the Players Association is how to divvy up orange slices during halftime.

“Those are our orange slices! Not theirs! The oranges are for kids,” Tanner said. “My dad says that if I don’t eat oranges I’ll get scurby. I don’t want scurby. The coaches ate my oranges last week. I saw them. They ate them and then told me there wasn’t anymore oranges so I told my dad and he said that our coach was a ‘cock smoker.’ The coaches don’t need no oranges. They’re old! My dad says old people don’t get scurby and that my coach will probably get the AIDS. Old people get AIDS all the time. That’s what (JCYFA running back) James McClendon says.”

The lawyer representing the Players Association, Troy Bracy says he is concerned that the League’s priorities are out of synch with the way the sporting world currently works.

“The orange slices are a big deal to these kids. The last thing we want is for one of these kids to go and play… oh, I don’t know, soccer because they can get more orange slices over there,” said Bracy. “The slices should rightfully go to the players, yet every week I hear more and more players telling me that they only got one slice during halftime. That’s not right. The fact that the League is hoarding the oranges is despicable.”

Over the last few decades, orange slices have been the halftime snack of choice for youth football teams across the country, but recently, due mostly to the failing economy, leagues have been cutting back on the amount of fruit that is served during games.

“What the players don’t understand is that this is a business, not a game. We aren’t out here to have fun, we are out here to sell a product to people,” Garmin said. “Sure, in the old days when oranges cost 50 cents for 10 pounds, we could give kids all they wanted. Hell, I can remember kids gorging themselves so much that they threw up two minutes into the second half. But those days are long gone. Have you priced oranges lately? It’s insane. I would rather rape my own mother than to pay $1.20 for 10 pounds of oranges.”

While the key difference between the Players Association and JCYFA is oranges, there are many other issues of contention including health of the players, proposed rule changes, the number of games in a season, the amount of acceptable yelling by coaches and a proposed performance enhancing drug testing policy.

“There is a lot of stuff we hate but I want oranges,” said Tanner. “My dad says I shouldn’t agree to anything because the coaches want to test my pee for leeriods and that the shots he gives me before bed time are for big muscles but I shouldn’t tell anyone because I don’t want them to make me pee.”

League officials are optimistic that a deal can be worked out before the season begins in August.

“It may seem like the two sides are really far apart but I think we can get there,” said Garmin. “Worst case scenario, we go get some scabs to play. And by scabs I mean those kids from Wheatridge. You know which ones I mean, right? Yeah, them.”