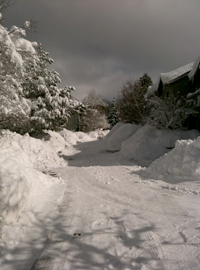 Mother Nature really sent a snow storm to Buffalo that dropped several feet of snow on the city.
Related Topics

BUFFALO, NY – After several years of attempting to destroy Buffalo, New York, Mother Nature has asked the city’s population what it will take to get rid of the city once and for all.

“What’s it going to take to get you people out of there?” said Mother Nature. “Tell me and I’ll do it. Everything I’ve tried hasn’t worked so just tell me what it will take for you to finally say ‘screw this place! Let’s get out of this peepee stained heck hole.’ Every year I dump more and more snow on you people and you still stick around. I don’t get it, this place is not nice enough for you to put up with this.”

Mother Nature said she is looking to the people of Buffalo to be honest with her so that she can succeed in her mission to destroy Buffalo.

“I think people are generally honest and someone will tell me what it will take to get them out of there,” said Mother Nature. “I’ll probably get a lot of sarcastic responses and a bunch of go ‘f’ myselfs but some one will tell me. There’s got to be someone out there that feels the same way that I do. You know someone who is looking to cash in on an insurance policy and move somewhere that actually habitable. Maybe I should post the question on Reddit, people get real responses on that, right?”

According to Mother Nature, she has been trying to destroy the city of Buffalo since 1920.

“I’ve tried everything I can thing of to get rid of Buffalo but for some reason… people just stay there,” said Mother Nature. “People were never supposed to live there. I’ve made it a mission of mine in recent years to wipe that city off the map but you… people just hang on. Why? What the hell is so great about Buffalo that you’ll live through everything I’ve done? Your football and hockey teams stink, there’s snow 11 months out of the year and it smells like a piece of poop wrapped up in a dead fish that is sitting in a vat of three-month-old vomit. So please, someone tell me what is so damn appealing about this place.”

Mother Nature’s most recent attempt to destroy Buffalo consisted of a snow storm that dumped almost nine feet of snow, followed by warmer temperatures that melted the snow and flooded most of the city.

“This year I decided to go all out,” said Mother Nature. “So I dumped a ridiculous amount of snow on the people there and then sent temperatures up to melt all that snow and flood the city. I call it a double trouble move. But it doesn’t look like it worked so I just don’t know what to do next.”

The Mayor of Buffalo is not surprised to hear that Mother Nature has been trying to destroy the city.

“I nerve really thought about it, but now that your mention it, it all makes sense,” said Mayor, Byron Brown. “It seems like it’s getting worse every year and you know we can’t blame it on anything else. I figured that we were cursed, you know, like the Mayor back in the 20s fucked some gypsy’s daughter in the butt and to get back at him the gypsy decided to bury the whole city in retaliation. But this Mother Nature thing makes a bit more sense.”

While many remain, the population of Buffalo has been declining since the 1950s.

“I don’t care what happens, I’ll stick around,” said lifelong Buffalo resident, Gordon Kratt. “Where else would I go? Philly? Fuck that noise. It’ll be a cold day in he’ll before I move to that shit hole. If you think Buffalo smells wait till you get to Philly. That place smells like a subway after one of those hippy music festivals. And I’m talking about the train, not the restaurant. Don’t get me started on what the restaurants smell like…”