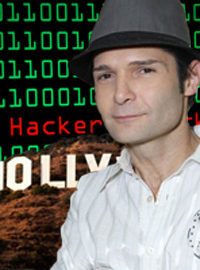 “If I’m not starring in at least one feature film by the end of next week I will release these emails that I have,” said Feldman. “I’m not messing around here. I’m fucking serious! I have emails from all of Hollywood so no one will be safe! Well, they will be safe if studios start making movies with me in them but that’s the only way they will be safe! I’m not joking around here! I will totally release these emails if I don’t get in some fucking movies.”

Feldman said he got the idea after watching news coverage of the recent hack of Sony that may or may not have been committed under North Korea’s direction.

“You know, I’ve been watching the news these last few weeks and I think that the North Koreans had the right idea about how to get what you want in Hollywood,” Feldman said. “If you want something to change, get your hands on emails that talk about how big of a bitch Angelina Jolee is and then threaten to give them to reporters. That will force (Hollywood studios) to do what you want. Just like what happened with Sony and ‘The Interview.’ Now I know that (Sony) ended up releasing the movie after all, but the president is there, you know? And now is the time to make my move.”

Feldman has given Hollywood studios one week to begin production on movies starring Corey Feldman. If the studios do not comply in that time, Feldman says he will begin releasing the emails.

“I have scripts ready to go, so a week is more than enough time to get things rolling,” Feldman said. “I guess the hardest part would be finding a new Corey Haim. Unless one of the studios decides to go with my take on ‘Weekend At Bernies.’ But whatever they want to do is ok with me because everyone of these scripts is gold. Like this one. It’s about a school for wizards with me as the hero wizard. Or this one about a war in the stars where I play a guy who saves the universe from a black guy with just my light sword. In that one I actually play all the characters because it’s mostly motion capture stuff.”

Los Angeles police are looking in to the case to determine what crimes, if any, Feldman has committed.

“This is a bit of a tricky situation,” said Los Angeles Police Detective Sid Witson. “I mean technically the studio was throwing these things away and they didn’t feel the need to shred them, so I don’t think we can necessarily charge (Feldman) with theft. There is the whole trespassing aspect but the studio heads aren’t sure if they actually want to press charges. Right now they’re leaning towards no since none of the info that Mr. Feldman found will hurt the company.”

It’s unclear what the emails contain but Hollywood experts believe the emails could contain remarks about projects, stars or what some studio execs ordered for lunch.

“We don’t think there is anything earth shattering in there but you never know,” said Fox Studios CEO Eric Soloman. “the stuff we threw out is just a bunch emails that an intern printed a couple years ago but, you know, I tend to document all my most horrible thoughts and ideas in email because I am a stupid man that doesn’t understand how the internet works. He might have an email where I asked Ted Danson for a BJ. Who knows? So we’ll probably at least listen to what his demands are. You know, I loved ‘License to Drive’ and I think it would be fun to remake it so maybe there is something there for him.”

Feldman says he came across the emails while digging through the trash outside Fox Studios.

“I was just hanging out and all of a sudden these thing just fell into my lap. Literally,” Feldman said. “The stuff that’s in these emails is pretty juicy, and not just because some of them landed in juice. Get it? See, I can still do comedy! Anyways, I have one where a certain studio head talks about ordering from Panera Bread and how he thinks the chick at the counter has nice tits. And another email talks about who they should cast in the next Wolverine movie. I’ll give you a hint, it’s not me but his name rhymes with Jew Hackman.”

Federal agencies are urging the studios not to give in to Feldman’s demands.

“It’s important for America and Americans to stand up to terrorists, even when they are weaselly little actors trying to blackmail multi-billion dollar companies,” said Senator Ted Cruz. “If we give in here we might as well give our country over to the Muslims and start learning Chinese.”