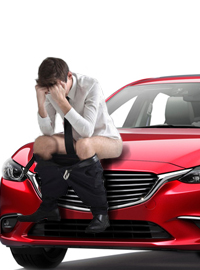 Inventor Thomas Dollbe has realized the world is not ready for his invention; Poop powered cars.
Related Topics

ST. PAUL, MN – Shortly after presenting his newest invention to a group of uninterested automobile manufacturers, Thomas Dollbe had to come to terms with the realization that the world may not be ready for cars powered by human feces.

“I’ve spent the last 20 years of my life designing and building this system that turns human poop in to power for cars but… no one seems to be interested,” said Dollbe. “With everything that’s been going on with energy and climate change and everything else I thought now might be the time for poop powered cars but… I… I guess no one wants to poop in their car before they drive it.”

Dollbe invented a fuel system that collects human feces and process it into a fuel that can then be used to power combustible engines, much like gasoline.

“Think about it. Everyone poops,” said Dollbe. “Heck, they even wrote a book about it. Me? I poop three, four times a day. Now think about what would happen if we were able to harness that the power of that poop and use it for us, instead of against us? We would have a virtually free form of power. Then, when people say ‘ass, gas or grass…’ it would take on a whole new meaning. Because poop comes from your ass. And it would be gas. I know that that phrase usually refers to anal sex, but if my invention becomes reality, it could be both.”

To demonstrate his fuel system, Dollbe climbed on to the top of his car, pulled down his pants, pooped into the special collection intake just above the engine, climbed down, started the battery powered poop conversion machine, waited 15 minutes then started his car.

“It’s such a simple process,” said Dollbe during his presentation “I poop every morning as soon as I wake up. I walk outside, do my business, then go about the rest of my morning routine. By the time I’ll ready to leave, the converter is done and I can go 326 miles on a single poop. It’s really convenient. If I have buffalo wings I can go 424 miles!”

Some of the automobile representatives that attended Dollbe’s demonstration said that his invention was “interesting” but that there was no market for “shit powered cars.”

“As an invention, sure, it was great. As a replacement for gasoline? No,” said Chevrolet product engineer Tracy Freemont. “There is no way any American is going to climb up on the hood of their car and shit in to their engine in order to drive the kids to soccer practice. At least not in most of the country. In Peoria they shit on everything all the time so I’m sure those freakazoids would be cool with it, but we can’t just sell cars to the freakazoids in Peoria. Fuckin’ Peoria. And people aren’t going to be happy about the smell. Good lord, who would want to drive around in a car that smells like shit? Literally like shit.”

According to Dollbe there are a number of benefits to using poop powered cars including clean exhaust, environment impacts, and price of fuel.

“You don’t have to pay those high gas prices anymore because you’re already paying for food, that’s all you need,” Dollbe said. “And think about this… If you were too easy at Taco Bell once or twice a week, then you would be saving even more. But I guess the world just isn’t ready for this. People complained about the smell but you get use to it.”

Dollbe demonstrated his invention at a recent conference of automobile makers. After the demonstration Dollbe was quickly escorted out of the convention hall by security and has not received a single inquiry about his invention.

“I didn’t see the first part of his presentation but I heard the yelling so I looked over,” said Ethan Kay, a spokesman for Ford Motor Company. “I look over and I see a guy sitting on the roof of a car, pants around his ankles. I had no idea what the hell he was doing. Then all these security guys grabbed him and carried him away. At least he was done shitting, because I totally would have thrown up if I saw shit coming out of his asshole. Uh, even thinking about it makes me want to puke a little.”