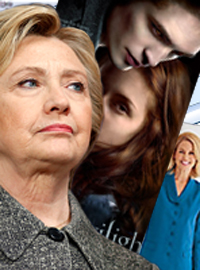 An FBI probe in to Hillary Clinton's email has uncovered a large amount of Twilight fan fiction and pantsuit catalogs.
Related Topics

WASHINGTON, D.C. – The investigation in to Hillary Clinton’s use of a private email during her time as United States Secretary of State has revealed more than 80 percent of the emails sent or received by Clinton were Twilight fan fiction and pantsuit catalogs.

The report also concluded no emails that could cause a national incident.

“(The FBI) reviewed all available emails and while we found nothing to indicate a violation of any law, we did find a shockingly large number of Twilight fan fiction stories and pantsuit catalogs,” said FBI Director, James Comey. “Again, these Twilight fan fiction stories and pantsuit catalogs are not an indication of any wrong doing but they are rather odd. Especially the volume of Twilight stories. Remember those Twilight books and movies? Apparently (Clinton) was a huge fan. Enough of a fan to write like 700 some stories about those characters. There were at least 200 emails arguing with Bill (Clinton) about who was a better match for Bella, Edward or Jacob, in the course of one 24 hour period in 2010. Apparently Bill wouldn’t pick a side. But still, that’s a lot of Twilight emails in one day. A lot.”

Although Clinton has refused to address the Twilight and pantsuit emails directly, a spokesman for her Presidential campaign said there is nothing wrong with Clinton sending emails about Twilight as the films were very popular at the time and pantsuits are a staple of diplomatic fashion.

“So what if (Clinton) sent a whole bunch of emails about Twilight and pantsuits,” said Tina Freemont. “There is nothing wrong with sending several thousand emails about Twilight. I’ve sent a whole bunch of Family Circus cartoons to my family and friends via email. Is that a crime? Is that worth the FBI looking in to my email activity? No. They should be looking in to the fact that I sent a bunch of (Democratic National Convention) emails to my friend in Russi… um. What? Ha ha. How about those Chicago Bears? They are going to win it all this year, right? Go Big Blue!”

The Trump campaign has jumped on the issue and Trump himself has suggested that the Twilight emails specifically show Clinton’s inability to connect with the American public.

“How can (Clinton) be expected to lead this country If she can’t stop sending Twilight fan fiction?” said Trump during a recent speech in Tulsa, OK. “Besides, everyone knows I write the best Twilight fan fiction. You should see them. They are the best. Everyone says so. My Twilight fan fiction is so good that they wanted to turn them into a new movie series. So you can look forward to that as soon as we get all the deals buttoned up. I can tell you, these are going to be the best Twilight movies ever made. Oh, and Hillary ‘Rotten’ Clinton wears a lot of pantsuits because – a lot of people think she’s secretly a man. That’s what people are saying. You don’t want a man running this country do you? Vote Trump!”

At this point Comey says the FBI’s review of Clinton’s email has been suspended, primarily due to the fact that FBI agents “simply cannot stand to read another email about fucking Twilight.”

“Holy shit, it’s been rough,” said FBI Agent Dirk Blackburn. “At the height of the emails there was 1,000 page document that was basically Bela and Jacob talking about where the best location would be for secret diplomatic talks about arms deals and Illuminati meetings. And let’s not forget the 257 page conversation about some magical ‘Ferngahzi’ land that Bella sent Jacob to? Fuck that was hard.”