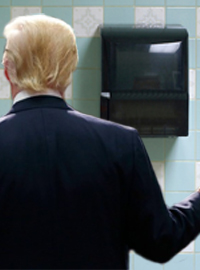 Trump recently spent over an hour standing and waiving in front of a manual paper towel dispenser thinking it would automatically dispense a paper towel.
Related Topics

WASHINGTON, D.C. – President Donald Trump spent almost an hour and a half standing in front of a manual paper towel dispenser, waiting for the paper towels to come out automatically.

“Apparently Trump, who let’s face it, is a dumb, dumb man, hasn’t used a manual paper towel dispenser before and was really confused,” said White House custodian Jade Olivera. “He thought it was one of those automatic paper towel machines where you, like, wave your hand near it and it spits out a paper towel. I guess he stood there waving his hands around the machine for well over an hour. At least we know he washed his hands.”

White House sources confirmed this week that Trump was confused by the manual paper towel dispenser and stood in front of it, waiving his hands, for over an hour, trying to get the towels to come out.

“(Trump) is familiar with automatic paper towel dispensers or bathroom attendants. He is not accustomed to turning nobs to get paper towels,” said Trump’s Press Secretary, Sean Spicer. “I don’t think that standing there for an hour and a half, waving around and screaming, isn’t unreasonable for someone to do. But also, remember, Trump is a dumb, dumb person.”

Trump was scheduled to attend a security briefing but when he did not show up for the meeting, staffers were dispatched to find Trump. A White House staffer eventually found Trump in a bathroom cussing and waiving his hands at a paper towel dispenser.

“(Trump) was supposed to be in his daily security briefing but never showed up. Usually he strolls in to catch the last five minutes of the briefing but that day he never showed up,” said White House staffer Rick White. “Reince (Priebus) told a bunch of us to go find him. We have to find Trump a lot. He gets lost or distracted really, really easily. Probably because he is such a dumb person. When I found Trump he was screaming bad words at the paper towel thing. And he was waving his arms around like a mad man. The really crazy thing is, his hands were dry. He had been there so long the air had dried his hands, and he no longer needed the paper towels. Yet there he was, still trying to get them.”

“I demand that paper towel machines, the things that spit out the little paper towels that you use to dry off your hands in the bathroom, you know what I mean, those things should be automatic because I had the biggest electorial college win in all of history. Bigger than (Ronald) Reagan. Just look at the numbers,” said Trump. “I’m smart. I am, like, the smartest one in the room. Everyone thinks so. Just ask them. Well don’t bother asking them because I’m telling you. And paper towels, those things, who needs those things? I think we should have a wall between here and bathrooms because… because… um… I said all the words I know.”

Until the existing paper towel dispensers can be replaced Trump has assigned five White House staff members to accompany him to the bathroom and hand him paper towels.