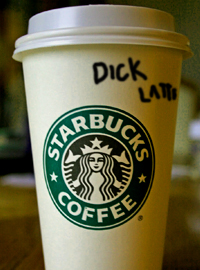 SEATTLE, WA – Starbucks will be expanding its menu next month, rolling out new dick flavored coffee drinks to stores across the country.

“When looking for a new flavor we asked ourselves ‘what do people, at least most people, like?’ The answer was obvious; dick,” said Starbucks Flavor Engineer, Kylie Kearns. “And the love of dick is worldwide. Almost every single woman has had a dick in their mouth at some point. And most men have as well. Our research showed that 70% of the population has had at least one dick in their mouth. In France that number shoots up to 94%. With penetration like that, pun intended, we would be foolish not to offer a dick flavor in our stores. People obviously love dick. I know I do. High five!”

Flavored drinks have become a staple at Starbucks and some seasonal drinks, notably pumpkin spice, see strong sales when available.

“We have had great success with our flavored drinks, like pumpkin spice, and we are hoping these new dick flavored drinks will be popular,” said Starbucks Marketing Director, Jean Gregory. “Everyone loves dick. Well, maybe not everyone, but a lot of people love dick. So hopefully everyone will love dick flavored lattes and dick flavored frapachinos. I can just imagine all the dick flavor combinations that we’re going to get. Thinking about a venti three-shot, four-pump, skinny mocha dick with caramel and whipped cream is making my mouth water.”

“We didn’t land on dick right away. We experimented with another of other flavors – banana, brussle sprout, failure,” said Kearns. “But when we reset and looked at flavors that are world wide, we came up with only a couple – Dirty water, dick and vagina. We already use dirty water to make our drinks so we went hard on dick and vagina. Fortunately, or unfortunately depending on your taste, vagina just isn’t as popular as dick. When we did taste tests there were are large number of men that just wouldn’t even try it. Women were much more open to experimenting there. But in the end, it was dick. It’s always dick in the end. Pun not intended.”

Although Starbucks executives expect the new dick flavor to be popular, some locations will not offer the new drinks.

“As far as the new dick drinks, we are going to skip Oklahoma, Utah and most of Texas,” said Starbucks President of Domestic Sales, Kurt Longlin. “It’s not so much that those places don’t like the taste of dick, because they do. Well, Utah doesn’t, but it’s more to do with the fact those parts of the country suck. So… fuck ‘em. They don’t deserve dick.”

Despite Starbucks projections, some market analysts are unsure how popular the dick flavor will be among consumers.

“I know we’ve all had dicks in our mouths. We all went to college. But I’m not sure how much people will want to continue having dick flavored stuff in their mouths,” said Edward Jones Investor Hank Freeble. “For most of us the dicks we had in college were enough and even more so, most women they don’t want any more dicks in their mouth after they get married so… I’m just not sure. We’ll see though. Maybe we’ll all go nuts for dicks again, like when we were 18 and just couldn’t get enough dick.”

Many Starbucks regular customers are looking forward to the dick flavor and some have started lining up outside stores to be one of the first to try the new drinks.

“I can’t wait to get the new dicks in my mouth. I love Starbucks and I love dick!” said Herman McAlister. “I’m gonna get me a dick drink and I’m gonna suck it all down. And yes, I know exactly what I’m saying, I’m not stupid. I just love dick and dick flavored things.”