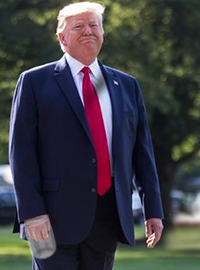 President Donald Trump has had his hand stuck in a candy jar for more than two days.
Related Topics

WASHINGTON, D.C. – President Donald Trump has had his hand stuck in a candy jar for over two days but he is refusing help and refusing to acknowledge that his hand is stuck.

Trump was first spotted with the jar stuck on his hand as he left a Cabinet meeting.

“As he walked out of the meeting he kinda just walked past everyone real fast and was holding his arm behind him,” said White House staffer, John Kemmins. “He didn’t do a very good job of hiding his hand though. It was pretty obvious that he had a jar stuck on his hand. And really, none of us were surprised. At this point, I think we all would have been more surprised if he hadn’t gotten his hand stuck in a candy jar.”

When asked about the jar during this morning’s press stop, Trump hid the jar and his hand behind him and changed the subject to immigration.

“Immigration,” said Trump. “People coming here even though they know it’s illegal and wanting to come here with jars. Those are the jars that no one talks about. Did you know that the jars that come across the border are full of drugs? I knew that, of course. It’s true. People have been saying that for months. That’s why we need a wall. To stop the jars. I’m really good at stopping jars. I once stopped a jar on 9/11. Some people are saying that I stopped millions of jars. No collusion. My inn-e-uh-gade-eon was, as everyone will tell you, the biggest ever. I had billions of people there. Way bigger than Obama’s. Space force. Space. Pew, pew! Zrooooommmm.”

According to witnesses, Trump got his hand stuck trying to get four M&Ms from a jar that was left in a White House conference room.

“After we left the meeting about selling national park land (Trump) noticed a jar with a couple M&Ms in it,” said White House Spokeswoman, Kay Sampson. “He reached in there, grabbed them and then tried to pull his hand out but couldn’t because he was making a fist. Even with those tiny, tiny hands he wasn’t able to pull his hand out without letting go of the candy and, well, he ain’t gonna do that. But now that’s it’s been a couple days… I’m not sure those M&Ms that he’s been holding on to are gonna be in good shape. You’d think that at this point they would be completely melted, and you’d think that he would be able to feel that. You’d think that, but with this dipshit, you’d be wrong.”

Several White House staff members have asked if they could help Trump remove the jar from his hand but Trump has ignored the staffers.

White House Chief of Staff, Mick Mulvaney, is considering trying to remove the jar while Trump is sleeping or otherwise distracted.

“We have to be realistic and keep in mind that Trump is a dumb, dumb person. I mean in the clinical sense. He is historically dumb,” said Mulvaney. “So we can’t expect him to take care of this issue on his own. Fortunately he sleeps about 12 to 13 hours a day so we have plenty of time to sneak in there and get that jar off him. I bet you $20 that he immediately tries to eat the candy when he realizes the jar is gone.”