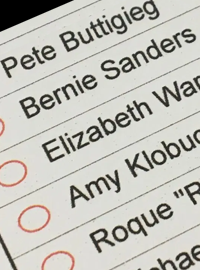 The Democratic National Committee is struggling to convince voters to vote for a DNC-backed candidate instead of the candidate that the voters actually prefer.
Related Topics

“There are at least five candidates in the field right now that (the DNC) want people to vote for but we have been unable to convince anyone non-white and younger than 50 to vote for any of them,” said
DNC Chairman, Tom Perez. “It’s frustrating as all get out and it’s starting to turn in to a crisis because none of those five candidates are winning! We can’t have the nomination go to, to… I won’t even say the name. I can’t say the name. It’s a curse around here that name. But you know who I’m talking about. I’m talking about… him.”

One of the ideas that has been proposed by Perez and other DNC leadership to get voters to vote for the candidates the DNC wants them to vote for is to hold mandatory three-hour lectures about how voters should think prior to allowing anyone to cast a vote.

“The three-hour lecture is a good idea because it will do two things; it will help to make sure that people vote the right way and it will make sure that only people willing to sit through a three-hour lecture – old white people – will vote,” said DNC Spokesperson, Michael Tyler. “The other thing it’ll do is bore the younger generations so that they lose any and all interest in politics. At that point, we win because we can just appoint whoever we want without all those damn kids getting uppity.”

According to the DNC, if a candidate that the DNC doesn’t want to win gets the majority of the pledged delegates thought the primary the risk of things changing increases.

“We can’t have things changing on us. Everything has to always stay the same,” said DNC member, Quinn Abaty. “And if a certain someone, he-who-can’t-be-named, wins the nomination, that won’t be keeping things the same. You understand? Things have to stay the same. We need leaders that actually don’t particularly give a shit about what people actually want. We need leaders that do what’s always been done and that is ignore what people want except for rich people that give us money and/or businesses that give us money and/or countries that give us money.”

“For some reason voters, especially young voters aren’t listening to us and are voting for… a person that they connect with or that they feel cares about them. That’s just not how this is supposed to work,” said Perez. “We need to pull together as a party and make sure the candidates that we want to win get the nomination, not the candidates that voters want. Because, I mean, what is this, Germany?”