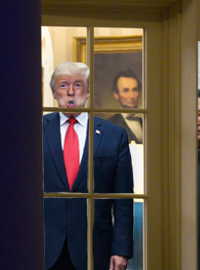 Trump has been seen pressing his mouth and tongue to the White House windows on several occasions.
Related Topics

“Earlier this week we had to remove a staffer here at the White House for insubordination,” said current White House Chief of Staff, Mark Meadows. “The President is the leader of the free world and it’s unacceptable for a lowly staffer to tell the President what to do… or even talk to him. Or look at him. I mean really, who does this kid think he is? Doesn’t he realize how dumb (Trump) is? I mean it’s like dealing with a really stupid wild animal. It’s best to just put your head down and act like there’s nothing happening, because really, there isn’t really much happening in (Trump’s) head.”

The name of the staffer has not been released but those familiar with the incident say the staffer “should have known better.”

“If you are a White House staffer, one thing you know, you should always know, is that you can never, ever, never, ever, nerver, erver, tell the President he can’t do something,” said White House staffer, Jordan Quigley. “You do that, you’re gone. We all know that. So of course the person who told the President to get his mouth off the windows was fired. I saw (Trump) licking the banister and I didn’t say anything and I still have a job.”

The President, who is known for having a short temper and is often quick to fire his staff, has been seen licking and otherwise pressing his mouth and tongue against windows in the White House on several occasions.

“Of course he puts his mouth all over the windows,” said a White House staffer that asked to be anonymous. “He is a stupid, stupid, stupid, dumb, stupid person. And he has the attention span of a gnat. So if someone starts talking and there is a window in the room there is at least a 75% chance Trump is going to get up, walk over to the window, and start doing that blowfish thing or smearing his face all over the window. Have you ever seen a dog do something like that? It’s the same thing, only when the dog does it, it’s cute. This? This is just disturbing.”

Trump himself denies that he licks or puts his mouth against windows and he calls the reports “fake witch hunt news.”

“I don’t lick windows but if I did, I’ll tell you that I’d be the best window licker in the world,” said Trump. “No one has ever liked a window like I have. I think that if you do lick windows, and I’m the greatest window licker that’s ever lived, and did you know that some houses in Georgia don’t have windows. It’s true. I have a good friend in Georgia, he’s very rich, not as rich as I am but he is ok, and he said that if you take Lysol and inject it you can cure the candoravenus thing. Which, you know, really does a number on things. So, yeah, we’re looking into that. DEMOCRAT HOAX!”

A memo was distributed to White House staffers reminding them that they should not tell the President how to behave or look him in the eye.

“We issued a memo to the staff to help them remind… oh, huh. Well, looks like I’ve been fired. So… bye,” said Meadows.

Now I see why I’ve never heard of you guys before this.