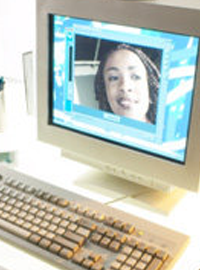 None of the attendees have admitting to generating the fart heard during a recent video conference.
Related Topics

RICHMOND, VA – None of the attendees on the weekly Dorchester International sales call have accepted responsibility for the audible fart heard during last week’s video conference call.

“Just as Jerome (Wallingston) was wrapping up the forecast presentation someone farted,” said video conference attendee, Brenda Cooper. “It was definitely a fart. And after the fart everyone just kinda sat there quiet for a minute. Even (Wallingston) stopped talking. I think we were all afraid to say anything. But I know we all heard it. It sounded like moist feet slapping against oversized crocs during the quiet part of a movie. It wasn’t me so it must have been someone else on the call. You know, maybe it was (Wallingston), I mean, he would be the last person that anyone would suspect because he was the one presenting, but you know, in those pressure situations a squeaker might slip out unexpectedly.”

Although no one has accepted responsibility for the fart, almost every attendee has denied being the one generated the fart.

“I think it was pretty obvious everyone heard the fart,” said Sales Representative, Christine O’Leary. “It was loud. And it had an unmistakable fart pattern to the sound. Like you know when you have whole garlic cloves on a pizza and you eat a lot of slices of that pizza and there is also a lot of cheese on it and then you just rip huge, blusterous farts all night? The fart was like one of those farts. It sounded like a tuba player having a stroke. It wasn’t me though. I bet it was (Cooper). She’s always eating fast food and stuff, and I’m pretty sure that she had a cup next to her from Taco Bell. Well, maybe it wasn’t her, because if she had just had Taco Bell, she would have shit herself.”

Accusations as to who is responsible for the fart have been shared on internal chats between employees with many accusing South Sector Sales Manager John Hinite.

“It was definitely (Hinite),” said Sales Representative, Caleb Deferge. “Just look at him. He is a walking fart. If you sat down with a piece of paper and drew a fart in human form you would draw (Hinite). It sounded like a hippopotamus gargling swamp water. And I’m pretty sure that I saw him kind of lean to the right, just slightly, right before everyone heard it. It’s got to be him. If it wasn’t him, it was totally (O’Leary). (O’Leary) ripped a nasty one in the office kitchen last year when she thought that no one was in there, but I walked in right as she did it. I swear to God it smelled like rotting fish.”

Hinite is unaware of the accusations that he is the one who farted but says he is not responsible.

“It wasn’t me. My farts kinda sound like a big diesel train revving up to a loud rumble before slowly driving over a cliff in to quicksand,” said Hinite. “Imagine if you brought an elephant to orgasm before punching it in the soft part of its stomach. That’s what it sounds like. Also, they smell like rotten cotton candy mixed with two month old eggs that have been left in the sun but I guess you wouldn’t be able to tell that over the internets. No, I’m pretty sure it was (Deferge). He’s an asshole.”

According to Sales manager, Karen Reeves, the fart was audible enough for her husband, who was in a different room, to hear it.

“After the call my husband Jim shouted from the other room that I shouldn’t fart on conference calls and I told him it wasn’t me and to go fuck himself and now we are getting a divorce,” said Reeves. “It’s ok though, I’ve been cheating on him with (Hinite).”