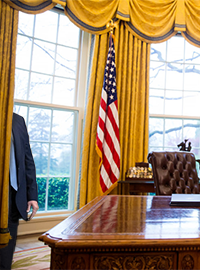 President Trump has been hiding from his staff and White House security since losing the Presidential election last month.
Related Topics

WASHINGTON, DC – After losing the Presidential election, by a considerable margin, Donald Trump has begun hiding from staff in the White House in a desperate attempt to remain President.

“(Trump) is a lot of things and one of the things that he is most, if that makes sense, is a toddler in an obese, elderly man’s body,” said White House staffer, Adam Marks. “And since he is a toddler he is throwing a hissy fit because he lost the election. And instead of acting like a grow-up, he is throwing a temper tantrum and hiding from everyone. God damn I hate that fucking idiot. January 20th can’t get here soon enough.”

Despite Trump’s attempts to hide, White House staff has thus far been able to find him with ease.

“That fucking guy (Trump) isn’t good at anything and he’s especially not good at hiding,” said Secret Service agent, Martin Willings. “The other day I walked into the oval office and I could see he was very obviously behind one of the curtains. The curtain barely covered his fat ass and you could see his shoulder and his shoes sticking out from underneath the curtain. I’m so glad I won’t have to see this guy anymore. Thank you, America. Thank you for getting rid of that piece of shit.”

According to staff, Trump’s hiding has had no impact on his productivity.

“Trump, on a good day, is only available for ‘work’ for a total of 15 minutes,” said White House Chief of Staff, Mark Meadows. “Since he lost the election – and he did lose it, badly – he has done fucking nothing. Nothing. Except hide. But no, we aren’t really seeing any impact to his ‘job’ because he never really did his ‘job’. I’m so glad I don’t have to see that dumb, dumb asshole and his dumb, dumb, dumb kids anymore.”

Since losing the election Trump has made several attempts to remain in power including frivolous lawsuits, pressure on local election authorities, denial, and now hiding from staff.

“Well, I guess he ran out of ideas. He tried his normal route of just suing people and that didn’t work. So I guess his next instinct is to just hide like a dog that got in to the trash when it knows it’s not supposed to get in to the trash and then it did so it’s hiding because it knows you’ll be pissed when you come home and take it back to the pound,” said Marks. “Oh, and let me just add, on record, that Trump is a dumb person. The dumbest I’ve ever met and I’ve met a lot of dumb people.”

Upon leaving office Trump will likely face a number of lawsuits and lingering questions about his finances which may no longer be protected by the federal government.

“You all know that Trump has serious debt and has been accused of sexual misconduct by a very large number of women and also the whole tax fraud thing that New York is looking into,” said New York Times Reporter, Jason Hensforth. “Once the Department of Justice is unable to protect him… he might be screwed. Oh and don’t forget that he knew Jeffrey Epstein and partied with Jeffrey Epstein. Remember that because it’s fucking true. Trump and Epstein were friends.”

Due to high demand, the Secret Service is holding a lotto to select the agents that will be tasked with physically removing Trump from the White House on January 20th if Trump does not voluntarily leave the premises.

“You may not know this because Trump doesn’t want any non-white people around him but a good number of Secret Service agents are minorities and even more are pissed that they got COVID because of (Trump),” said Willings. “And when we first started talking about the possibility of having to physically remove Trump from the premises the number of volunteers we had for that detail… well, it was a lot. So we’ve had to do a lotto type thing so if it comes to that we will pick agents randomly so it’s fair. God damn I hope I win.”