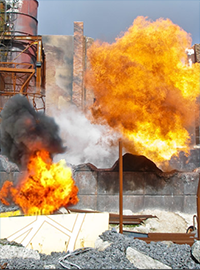 HOLLYWOOD, CA – As summer approaches and businesses begin reopening in full, people across the country are looking forward to heading out to their local movie theater to catch the newest summer blockbuster films.

To help The Scoop News readers plan their summer movie going experience, a handful of renown movie reviewers have provided a list of some of the most anticipated summer movies.

Garfield Again
“Hollywood loves a reboot and right now the hottest reboots are the ones giving viewers a dark, brooding, gritty reboot of a previously fun and joyful film or franchise. Gone are the bright colors and playful interactions between Garfield and his owner John. Instead, we will see Garfield in muted orange as he learns that Odie is responsible for the murder of his owner John. Garfield tracks down Odie and the fight between the two power creatures destroys Garfield’s home of Muncie, Indiana and kills thousands of bystanders. There is bound to be some twists and turns along the way, including the rumored appearance of Nermal.” – Jamie Kleinst, ilovemoviessofuckingmuchithurts.com

Explosions!
“Explosions are synonymous with summer blockbusters and this movie has a ton of explosions. Who doesn’t love explosions? With everyone couped up over the last year-or-so people want to get out and see some shit explode. Explosions! will be the biggest, most crazy movie this summer as it will just be a series of explosions. The climax is sure to be spectacular as it will feature the city of Huntington Beach exploding. The film was directed by Michael Bay so you know there will be a ton of explosions and almost no plot whatsoever. Oh, and yes, there will be cleavage -it’s Michael Bay.” – Shawna Brealy, moviewatcherperson.com

Harry Potter versus Baby Yoda
“It’s been nearly ten years since Harry Potter last terrorized people in the world of magical education, and the students at Hogwarts want to keep him erased from their memory. But Harry has one more plan on getting back to Hogwarts. He resurrects Baby Yoda and sends him off to kill and as more bodies fall to the ground, the stronger Harry becomes. This is until, Harry realizes that Baby Yoda isn’t going to step aside easily and must be taken down himself. Hogwarts and the surrounding towns will be destroyed during the climactic battle.” – Mel Crenshaw, melikemovies.org

Marvel Super Hero Movie: The Movie
“For the last decade Marvel Studios has been dropping huge movies during the summer months and this year is no exception. Marvel’s newest film, Marvel Super Hero Movie: The Movie will feature the origin of a new superhero as they discover their power and struggle to control their new powers and then reject their power but then embrace the power but then second guess themselves and whether or not they are a hero at heart but then they will find courage and purpose and use their new powers to defeat a former friend turned enemy with similar powers. There will be a love interest of some sort and also some quips and curious casting decisions. The final battle will feature a city getting blown up. The film stars… let’s see, who hasn’t been in a Marvel film yet? Let’s say Kathy Bates and… Morgan Freeman.” – Fabian Hernandez, moviesmoviesmoviestittiesmovies.com

Family Drama
“Emma Watson takes a dramatic turn and stars in this film about a young woman who is struggling to find her place in society and her family. Julia Roberts will play the mother who doesn’t understand but just wants what’s best for her daughter and Denis O’Hare will play the distant but otherwise nice father that tries to not get involved. The drama comes to a head as something happens, and everyone argues and gets upset but then something else happens and everyone forgives each other but things aren’t the same. Maybe the girl goes to college? Probably something like that.” – Kyle Maweese, guymovienightbutwithchicks.tv

Couples Therapy
“A classic buddy comedy featuring two of America’s favorite comedians Adam Sandler and Melissa McCarthy. The pair play a married couple that are forced to go to Couples Therapy to be eligible to claim a million-dollar inheritance. Hilarity ensues as the couple navigate through their lives and find the key that made them fall in love in the first place. Expect many touching moments as well as an abundance of fart and poop jokes.” – Beth Murphy, girlonmoviesbutnotinagrossway.net

Open Area
“This film, starring a diverse cast and directed by someone who isn’t a CIS, white male is a truly amazing film that will challenge the audiences’ ideas of race, sexual identity, and society – therefore it will go largely unseen by the American public. The complete lack of explosions will ensure that no one in Texas will ever watch this film. However, the film will receive, deservedly, a number of award nominations thus guaranteeing all involved will be offered Marvel films.” – Molly Plurser, moviereviewsandsofaexchange.com