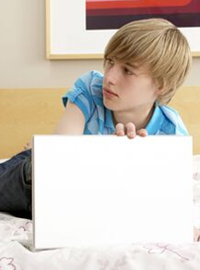 Teen Jordan Mustaker says he will stay in the hotel room alone while the rest of his family goes to the pool.
Related Topics

CORPUS CHRISTI, TX – A teenager on vacation with his family announced that he will just stay in the room, alone, while the rest of the family goes to a hotel pool.

“I’m just gonna stay here,” said Jordan Mustaker. “You all can go to the pool and I’ll just stay here and… um… read… uh… this book that’s here. I don’t like the pool anyways so you I’ll just stay here. I won’t even turn on the computer. Or my phone. Nope, just gonna read. This book… Eat, Pray, Love. It looks good. I like to read. I will just sit here and read and I won’t use the computer. I don’t even know the wi-fi code. So just go without me.”

Jordan’s decision to stay in the room while the rest of the family goes to the hotel pool has created some confusion for Jordan’s parents, Kenneth and Lauren Mustaker.

“I don’t know why Jordan wants to stay up here all by himself and not go on down to the pool,” said Lauren Mustaker. “Yesterday we all went to the pool and I thought (Jordan) had a swell time. In fact, it was his idea to go to the pool. (At the pool) there were a bunch of girls his age, maybe a couple years older, having a good time and we told Jordan to go over and talk to them, but he can be a shy little boy, so he just sat by the pool with a towel on his lap. Darn shame. They were cute girls. Wearing cute little bikinis and splashing around.”

When his father insisted Jordan join the family at the pool, Jordan began to complain of a headache and continued to say that he will stay in the room, alone.

“It’s kinda weird, but I get it, I was his age once,” said Kenneth. “I can remember when I was around his age my parents tried to get me to go to an amusement park but I had a new Dean Koontz book that I just didn’t want to put down. Kids are like that with books, so I get it. There’s just a certain magic that comes along with being alone in a hotel room, with a nice book.”

Jordan’s siblings are excited to go to the pool and are indifferent to whether or not Jordan joins them or stays in the room.

“(Jordan) just wants to look at the dirty websites,” said Jordan’s youngest brother, Zaydon. “The ones with the boobies. And butts. The ones that Mommy says are an inaccurate depiction of sex.”

Despite what his brother says, Jordan has insisted that he’s just tired and would rather relax with a nice book.

“Really, look, I’m turning my phone off,” said Jordan. “See, it’s off. And I don’t even know where the laptop is. I mean, is it in the car? Yeah, I think it’s in the car so I mean I couldn’t even look at that if I wanted to. Nope, just going to read a book. I love boobs… books. I love books.”