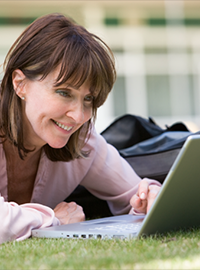 “For years people have been posting comments and updates on Facebook as if they are experts and now they will have the degrees to legitimize what they are saying,” said Facebook Education Director, Wilson Davvies. “Think of how much better the world will be when everyone has a degree. There will be no more arguments. No more misinformation because everyone will be right! I can only imagine that it’ll be akin to Utopia. Or at the very least the Hanging Gardens of Babylon. That was a good place right? Well, you know what? It was a great place because I just earned my PhD. in the Hanging Gardens of Babylon, so you know, I’m right.”

The new degree programs will be run under the new banner called Facebook U.

“People on Facebook already say they are ‘doing the research’ and are already experts in science and foreign policy without these degrees and we recognize that,” said Davvies. “So what Facebook U offers is when someone with an actual education or expertise in a given area challenges a Facebook users comments or posts, that person can counter and say ‘well, actually I have a degree’ in whatever. They already do that, sure, but now it won’t be a lie.”

Initially, Facebook U will offer degrees in Research, Whataboutism, Foreign Policy, and America, with plans to expand in the coming months.

“There is a lot of demand for ‘research’ experts on Facebook, especially as COVID-19 continues to be… a thing,” said Facebook’s Degree Administer, Amanda Hodgkiss. “The research degree is pretty general in nature. Meaning it’s not focused on a particular area. This will allow Facebook users to say they have a degree in research when talking about vaccines, effectiveness of masks, climate change, reproductive health… anything really. The research program will just be about research. Nothing else. Not researching anything. Just… research.”

The Whataboutism degree is the first of its kind and will only be available through Facebook U.

“Whataboutism, that’s a degree that you can only get at Facebook U,” said Hodgkiss. “For those that don’t know what it is, whataboutism is the practice of responding to an argument or a statement of any kind with just a list of unrelated things prefaced with the words ‘what about’. I’m sure you’ve seen it on your Facebook feed because it’s very popular among people that can’t win an argument or provide any intelligible point. So… most Facebook users. The great thing about it is that, much like the Research degree, Facebook U offers students a list of topics that can be used at anytime. Once you have a list of things you can ‘what about,’ you officially have a degree in Whataboutism.”

According to Davvies, each degree program will contain only one, three-minute course with no requirement for attendance or testing.

“We’re doing away with the whole ‘academic’ side of degrees, because really, that’s just a pain,” said Davvies. “Who in their right mind is going to sit there and actually take a test to prove knowledge in this day and age? Nerds, that’s who. Most normal people don’t have time for that. They have kids to raise, rallies to attend. This radical approach to earning a degree just makes it easier for people to go out into the world and spread their wealth of knowledge.”

The new program will cost $3,000 and will not require any prerequisites of any kind.

“Facebook U is a steal for those looking to add credibility to the things they say on Facebook,” said Facebook U Business Manager, Vern Broente. “All someone needs to get a degree in one of our top-of-the-line programs is $3,000. And access to all of their personal data. Or at least the stuff Facebook doesn’t already have access to.”

According to FacebookU, more than 10,000 people have signed up for one of the new degree programs, with the Research degree track the most popular.

“People are really excited about the degree in Research,” said Hodgkiss. “Especially in certain parts of the country, like, the middle bit. And yes, almost all of our students are white, suburban people.”

Executives at Facebook created the new program after noticing how many Facebook users used the application to make sweeping and questionable statements about science and politics.