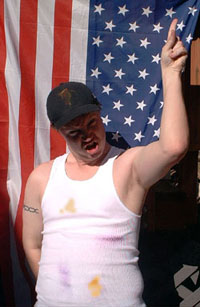 Ken Williams chants the new National Anthem as he stands in front of the American Flag hanging outside of his Houston home.
Related Topics

WASHINGTON D.C. – Beginning later this month, Americans will be singing a different tune. With new legislature proposed by President Bush, the current National Anthem is set to be replaced by a more patriotic and inspiring chant.

President Bush announced the change at a White House press conference late last month. With American patriotism riding high after a successful Olympics and the tragedy of September 11, 2001, Bush said “the time is right for a new American voice.”

“‘Oh say can you see’ just doesn’t work for the American public anymore. We, as a nation, need something stronger, more aggressive and something that tells the rest of the world not to mess with us because we are tough and don’t take no gruff from anyone. With the start of April, ‘U-S-A’ will be chanted instead of ‘The Star Spangled Banner,’ in our schools, at our sporting events, when CNN announces the capture of Taliban war criminals and when TV stations cease programming for the day and they show a picture of the flag and play the Anthem” said Bush during the press conference.

The new Anthem, “U-S-A,” consists only of the three letters U, S and A repeated over and over again. It has not been made clear however, exactly how many times the chant should be repeated, though it is being speculated that it will be somewhere in the neighborhood of 50 to 75.

“This is the smartest thing that we can do at this point,” said Secretary of State Colin Powell. “Not only can very few Americans even remember the words to ‘The Star Spangled Banner,’ but this new chant has already become a part of every American sporting event. Anyone who watched any part of the Olympic coverage heard it at least 30 times. Even if they only watched for 10 minutes. We haven’t seen something spread through the country like this since the Lambada.” Said Secretary of State Collin Powell.

Public support so far is in favor of the new anthem with a ratio of 4-1 for the change.

“Hey man, I tell you what, I like this here change G.W. is puttin’ through. When I was a kid I sang that Sat Spangled thingy and it never got me goin’ like this here ‘U-S-A’ chant does. If’n I hear that I git all mad and just want to kick some foreigners ass. U-S-A, U-S-A, U-S-A,” said Texas businessman, George Wilburn.

Also included in Bush’s initiative is what’s being called the “2-minute Hate.” This is to coincide with the new National Anthem and will require that every American to shout, scream or violently lash out in hatred directed towards an image of Osama bin Laden everyday at approximately 10 AM EST.

“America is at a turning point in it’s history and with these new uniting changes, we will be ready to face whatever terrorists come through our doors,” Bush said.