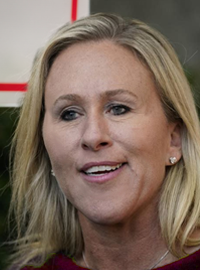 Marjorie Taylor Green, who is stupid, revealed her "reservations" for the new year.
Related Topics

Greene did not specify how she plans to stick to her “reservations” but did say she “got plans to reservate.”

“I gonna reservate all over the place this year,” said Greene. “Gonna make so many reservations that all the people in Georgia, except gays and deoncrats, will love me and not vote out. Vote out bad! Fire bad! Homos bad!”

During the interview Greene said she makes “reservations” every year.

Although Greene clearly meant something else, the Fox News interviewer made no effort to correct Greene.

“To be honest, I wasn’t paying attention. I was just looking at my phone and liking racist tweets,” said Fox News host, Neil Cavuto. “If she did say something that wasn’t correct, I’m sure that it’s just the woke mob, left-wing-media, demoncrats trying to just make a stupid person look more stupid. Like they do with (Greene) all the time. Not a day goes by that the corrupt, Left-wing media doesn’t try to show (Greene) doing something stupid or saying something stupid. They should really try to focus on someone else. Like Lauren Boebert. We all hate her now so go ahead and pick on her. She’s dead to us.”