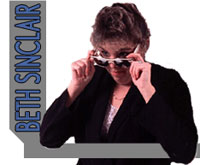 KISSIMEE, FL- Inspired by the Blair Witch Project, three aspiring filmmakers from Florida have started their own production company, Sting Productions, and produced their own low-budget smash hit, which was filmed entirely on a hand held video camera. Just a little over a year ago, these three blokes had a Sony model camcorder, two 8mm tapes and twenty-five dollars. Now like the Blair Witch boys before them, they are millionaires.

The premise was simple enough. Follow some guy around a mall for a day and record everything he does. The catch is, the subject didn’t know he was being filmed. The film has everything, humor, sexual tension, deviant behavior and public nudity, which if you ask me are all the ingredients to a sure-fire moneymaker.

“Well, what we basically did was, we took a tape recorder with us to the mall, and we just followed this one dude around, all day. Then we sold it to Artisan Entertainment for a cool six million dollars,” says Allen Jiverson, writer/director/cameraman/soundman/key grip/best boy/caterer of “A Day at the Mall…Project”

“This film is very cutting edge, these guys are really on to something,” Artisan Entertainment president, Joel Otto said of “A Day At The Mall… Project.” “It is an instant classic, a real laugh your ass off, then cry a little, get real grossed out and pay seven bucks to see it again the next day type thing.”

“Funny as Hell, but in a sad, desperate way. It’s like looking at a bad accident. You don’t want to see the guy with eight broken ribs sticking out of his chest but you cant look away,” said Entertainment Weekly movie reviewer, Mindy Olsen.

Rolling Stone even went as far to say that it’s “the funniest movie since, ‘Animal House’ or at least ‘The Coneheads’. Or maybe even ‘Deliverence.”

The only criticism thus far has come from Kent Brosnam, President of the Feature Film Association.

“I’m no critic, but this was the least funny movie I have ever seen, and I’ve seen the complete Chevy Chase anthology, so I KNOW anti-laughter,” Brosnam said. “It looked more like my kid’s birthday party then a movie. I hated this movie so much I’ve considered having a lobotomy to have it removed from my memory. I haven’t been this disappointed since I saw Howard Stern’s “Private Parts.” I mean come on, did we really need the 20 minute pet shop orgy? That was just completely unnecessary, and was at least five minutes too long. And to think, I used to really respect Bessy Page, but she has let me down tremendously. Now she must die.”

Late last week, Artisan has also announced the rest of their fall lineup which will include: “The Frank Gifford Project,” The Thanksgiving picture, “The Suicide Kings Project” and on the crucial December 25th opening day, “Connections?: The Gary Coleman/ Emmanuel Lewis Project.”

In a related story, The Hughes Brothers are at it again after their commercial flop, “American Pimp.” The brothers have gone back to their roots, the projects of The Watts District, with their cutting edge, deep look at African American Life in the Inner-Inner City. “The Blair Witch ProjectS” is the new film written and directed by the Brothers Hughes.

_Beth writes regularly for “The Trenton Time” and “The New Jack City Chronic-al.” She is also the editor of her own magazine, “Naked People: Caught in the Act.” She appears in The Scoop out of the goodness of her own heart and is working for free. _