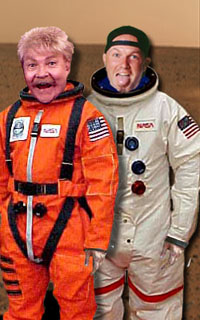 WASHINGTON, DC – Riding both the highs and lows of landing two separate spacecraft on the surface of Mars, NASA announced this week that a manned expedition to the red planet will begin preparations later this year for lift off in 2006. To increase visibility and public support, several celebrities have been chosen to man the first mission to Mars.

“Sending celebrates is the perfect way to get (manned Mars mission) off the ground – no pun intended,” said NASA Engineer Grayson Toloson. “Remember how much press and support that little turd Lance Bass got when he tried to con the Russians into letting him fly on one of their ships? He got an assload, and not just from his band mates… again, no pun intended. With as much bad news as NASA has had to deliver lately, this should help bring a positive spin back the project. The best thing of all is that if something horrible happens, Earth will be just fine, if not better off, without these people.”

NASA representatives are already discussing plans to allow the CBS television network to document the training and preparation for a new reality TV show.

“If there is one thing we have learned over the last couple years it’s that the common, ignorant American viewing public can not get enough of celebrities in ‘real life situation’ on their TV screens,” said CBS spokesman Terri Verts. “We’re sure that this partnership will bring some quality television… but I think in order to make this really successful, we’ll need to tone down the educational value a lot. Can’t have our happy little viewers thinking now can we? There is a little saying we have in TV and that is ‘more thinking, less ratings.’”

The celebrities will begin extensive training later this year and further training will be conducted until the planned launch date.

“Whoa, I mean… oh man, this is gonna be so, awesome,” Reeves said. “It’ll be like, so much better than any of the other things that I’ve done. Like movies. And this will be a good chance for me to prove to the world that I really are smart. That dumb thing is just an act. But man, it’s gonna be totally… awesome. I just got off the phone with (Taylor) he’s gonna bring up five bags of confetti. Do you think that it’ll screw up the machines? That would kinda suck, but it’ll still be fun… and awesome. Totally fun and awesome.”

While public reaction has been mixed, many people are looking forward to seeing the “stars” go to the stars.

“Oh man, that has to be the best idea that NASA has ever come up with,” said Brian Foreman of Norfolk, VA. “I hate that fuckin Limp Bizket douche and seriously, Paris Hilton has gotta be the biggest skank I have ever seen in my life. She so nasty I wouldn’t fuck her with your dick, you know what I’m saying? Anyways, I’ll watch it, and I hope the thing blows up. It would kinda suck to loose Rip Taylor, but sometimes you gotta loose to gain.”