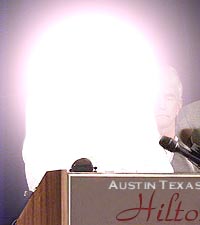 AUSTIN, TX – In a surprise address to the Austin Texas Hog Farmers Association, God the Almighty appeared in front of human eyes for the first time in centuries, and condemned the human race for what he described as “the relentless overpopulation and blatant destruction of thy most beautiful creation, the Earth.”

During His speech, a noticeably upset God lashed out at the hog farmers, and the entire world population, for having too much unprotected sexual intercourse.

“Listen to these words, thy words of God; Stop your fuckin’, aight!” said God. “Sure I wanted you to be prosperous and fruitful, but this is just ridiculous. There are 6 billion of you little assholes running around down there and I’m sick and fucking tired of trying to keep an eye on all of you. Oh yeah, and all you little pricks over there in China, tie a frickin knot in it! Is that all you people do, eat rice and fuck? Haven’t you ever heard of contraception? You know, “Rain-Coats,” “Jimmy Hats,” “Cock Blockers?” Jesus, I created bacteria that doesn’t reproduce as fast as you guys.”

During His tirade, God cited numerous examples of how His attempts to provide “a good, safe fuckin,” have been abused since the Creation.

“I even created a pill and you won’t use it! I mean come on people. How hard is it to take a damn pill? You just put it in your mouth and swallow. You ladies should be especially should good at that,” God continued. “Oh, and here’s the kicker, I create abortion, and half of you idiots think it is a sin. I swear, sometimes I just want to start all over. Those dinosaurs weren’t half the problem you are.”

In one of the more His more surprising revelations, God revealed that he had secretly wiped out entire areas in an attempt to curb this population problem.

“You know, I have been real active over the past couple years trying to take care of this shit myself. And, you know, up until recently, I thought that I had done a pretty good job. You think all those hurricanes, earthquakes and mud slides were just some freaky weather shit? Guess again, Hadji. But you fuckers are just like ants. I’m gonna say again and you can put this on a button or T-shirt or whatever; Stop Your Fuckin’, aight? Oh and by the way, that movie “Dogma,” hi-fuckin-larious”

After God took his leave of the room, the audience was visibly shaken.

“Jeez, he was really pissed,” Austin Bugle reporter John Wheaton said. “Shit, I don’t think he’s been that pissed since Larry king married that 20 year old. I mean he must have really had it in for that poor girl.”

Although God claimed to have more to say, he regrettably cut the press conference short, stating that he had “a little business in Turkey to take care of.”