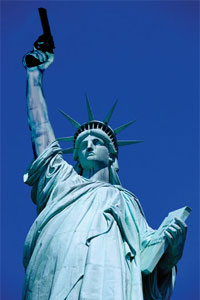 An artist's interpretation of the new Statue of Liberty.
Related Topics

NEW YORK, NY – In a radical move to show the world that Americans will stand defiantly in the face of terrorism, plans were unveiled this month to change the Statue of Liberty to a more “aggressive and purely American” stance. The proposed change, among others, will remove the torch from the statues hand, replacing it with a handgun.

“We feel that updating the statue’s image will show terrorists and terror supporting governments around that world that we aren’t a country of pussies,” said New York Mayor Michael Bloomberg. “Not only are we replacing the torch, we are toying with the idea of rotating the arm so that it is pointed outward, away from her, not above. That way we can have the gun like it’s pointing at someone. Once we do that we’ll probably make the whole platform rotate so we can point the gun in the direction of specific places. We could even have Lady Liberty holding the gun sideways, like a gangster. That would be even scarier.”

Among other changes to the statue, there is talk of changing the book in her hands to the Holy Bible, changing the robe she wears to a combination of the American Flag and the Texas State Flag, and a change to the statue’s facial expression.

“Right now, we’re just concentrating on the torch hand, but we are kicking things around,” Bloomberg said. “Right now Lady Liberty looks fairly peaceful, but when she gets a gun in her hands, I think she’ll need a more aggressive look. You know, like you see on a woman who has just said the phrase ‘Bitch, he’s my man! He ain’t yo babbies daddy.’ I think that look would fit perfectly with the emotions we are trying to convey.”

The Statue of Liberty was a gift from the people of France to celebrate the relationship built between the two countries during the American Revolution. The changes made to the statue will be the first changes to the statue’s design since it was assembled on Ellis Island in 1886.

According to sources close to the President, President Bush is toying with the idea of removing all references to France from the history of the statue.

“This is just the move we need to make to prove to them Frenchie bastards that they shouldn’t mess with Texas… and America,” Bush said. “Sure they bailed us out durrin’ the… re… ra… Romulon Klingon war, but if they think that we can’t change the statue, they got another thing coming. Because if they aren’t with us now, they are against us. So we are reprinting every history book in the country to remove any and all references to a France and American friendship.”

While most Americans are applauding the bold move, there are many who think it is a bad idea.

“Man, that is the stupidest thing I’ve ever heard,” said New York resident Bonnie Orbison. “If they change the statue they should give her bigger tits or something, not a gun. If it had bigger tits, it could be a role model for young girls or something. Bigger tits and a smaller waist, because that’s what men all want and what all women should look like. Maybe even give her one of them halter tops that look so damn hot on the girls up on 58th.”

Construction on the statue is scheduled to begin in the fall, and will be finished by July 4th, 2008.

Wtf???Y Would They do such a thing keep the statue the way it is and first of all the statue should be peaceful not turned in to some gangsta girl of a big slut the statue is a smybol of peace and you think terriost gunna stop cuz they see the statue holding a gun or have big tits!!

I think they should replace the flame with a middle finger.