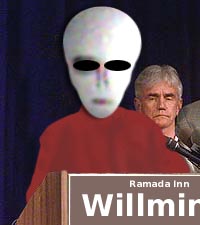 Kihaaskcufhierkdo, a "Hof" representative, stands in front of the crowd gathered at the Wilmington Ramada Inn and answers questions.
Related Topics

WILMINGTON, WY – After years of searching and mass speculation centering around extraterrestrial visitors to earth, a race of alien beings has revealed themselves for the first time at the Wilmington Ramada Inn.

“Hello people of earth. Consider this our formal hello. As many of you know or may suspect, we have been here a very long time. We now feel that the time is right to finally reveal ourselves to you and maybe stop some of the horrible rumors that have been circulating over the last 50,” said “Hof” leader, Kihaaskcufhierkdo, with the aid of a translator.

According to Kihaaskcufhierkdo, the Hof first landed in Wyoming in the Late 50s, not in Roswell, NM as once believed. After landing, the aliens immediately began abducting men and women from trailer parks to perform their tests on.

“The people you call ‘white trash’ are easy to abduct. Because there are so many of them living in such a little area, it’s almost like a buffet. That and everyone hates and ignores them,” Kihaaskcufhierkdo said.

The alien race was quick to dismiss reports that they are nothing but a bunch of ass raping sodomites.

“Hey, look. About that. See, when we started out in the 50s, we wanted to study every aspect of you guys, physically and mentally. So of course, we did a few rectal exams,” said Kihaaskcufhierkdo. “We did a few of them, and that was it. We’re not a bunch of ass raping sicko’s here, we’re scientists. Well, the story got out and now were labeled as “homo’s.” But that’s not what we’re about. We’re all about love. And sex. But mostly love. Except for Asdftihsfworwoa over there. He is what you humans call a nympho. There’s no love there.”

The Hof also offered their theory about who may be responsible for the ass rapings the occurred after 1960.

“Well, we know for sure that there is this guy in Kentucky who dresses up like an alien and gets people in their homes, I think his name is Steve. He is one weird son of a bitch. He doesn’t even use a real probe. He uses one of those drain snakes, but he’s got it all suped-up, like a race car. He’s what you humans call fucked up. If anyone wants his name and address see our agent after the press conference.”

Another thing that the Hofs are upset about it the recent “revelation” about the mysterious crop circles.

“Come on!” Kihaaskcufhierkdo said. “Do you guys really think that three idiots from England are doing these? Hell no, that’s all us. OK, maybe not all us, but we do about 90% of them. Why? Because we can, and we just like to mess with you guys. You guys are easy. But there is no way that those three guys are doing them all. Here look. I just made one outside of Atlanta.”

The Hofs, who were originally sent to earth to gather information for a hostile takeover of our planet, stated that they have changed their ways and have come to love the earth and it’s “colorful” inhabitants.

“OK, you got me. Yes, we were gonna come here and wipe out your entire planet and use you as food. Does that make us bad guys? No. We just like the taste of human flesh. But then we all kinda just fell in love with you. And really the only other time we almost killed all of you was when you canceled ‘ALF.’ Then came ‘X-Files’ so we let you all off the hook,” Kihaasdjjshierkdo said.