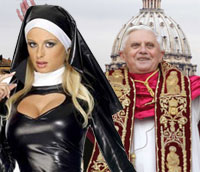 VATICAN CITY – In an effort to prevent further molestation of young boys by priests in the Catholic Church, the Pope has announced a change to the way mass will be conducted. Young boys will no longer participate in mass and in their place priests will use young, attractive women.

“There willa be ah no morea alter boys inna the church,” said Cardinal Antonio Cassius of Italy. “Instead, we willa use the ah young, attractive girls. That ah way no ah more boys they will not ah be molested. Priests, theya no likea the beautiful girls. They likea the boys with the tight, sweet assholas. YouknowawhatI’masaying? They likea to havea the sex with the boys ina the butthole. Am I ah saying that right ah way? My English is ah not so good. What I’ma saying is that we ah likea to put our penis wherea the poop comes out. Si?”

The announcement comes after several attempts to rid the priesthood of pedophiles who prey on young men failed.

“We tried everything but there were just way too many,” said Cardinal Alex Watson of New York. “We tried the always effective method of over-exposure. Like when you are caught smoking as a kid and your father makes you smoke cigarettes, one after the other, until you get sick so you don’t ever want to smoke again. We tried that same thing with boys and priests. We locked a couple priests in a room with 200 boys but they still came out ready to molest more boys. They also had really big smiles on their faces. I know if I had sex with that many young boys, I don’t think I’d have the strength to move, let alone smile.”

By replacing alter boys with alter girls the church hopes to reduce, if not stop altogether, the molestation issues that have plagued the church for the last 20 years.

“If there are no boys, then there are no boys to molest,” said Watson. “It’s very simple. And since we can’t cure the priests of wanting young boys then we will get attractive girls that the priests won’t be attracted to. Problem solved. (The girls) have to be attractive though because if they look boys, even in the slightest, then the priests will probably try to molest them. They also need to be over the age of 18, because if there is something that a priest loves more than molesting a boy, it’s molesting a boy who’s under age. When they’re older it takes a lot more to buy their silence.”

In order to make the plan work, Pope Benedict has set forth clear guidelines on what the new alter girls will wear and even look like.

“First of all, all the alter girls will pretty much wear just bikinis,” Watson said. “They’re all going to be pleasant to the eye and showing a lot of skin, so the priests will only look at them if they absolutely have to. I’m talking girls with big breasts, full, pouty lips and long hair. Preferably blonde but we’ll take the occasional red head. Really though, the boobs are the key because they’re like kryptonite to a priest. Vaginas too. If there’s one thing that priests hate more than boobs, it’s a clean shaven vagina. Because let’s face it; there are some priests out there that like little chubby boys. Little chubby boys may have boobs. It’s a fact of life. We didn’t make them that way, we can only blame god for it. So really, it’s all his fault.”

Despite the new policies, many people outside of the church remain skeptical.

“That’s just plain dumb,” said Jim Marsten of Denver, Colorado. “I know that not all priests are gay pedophiles. I mean, I know a lot of them are, like upwards of 98 percent, but that still leaves that two percent that would actually like a sexy girl. I know I would. I even thought that maybe I would join the Priesthood. Do you know how long it’s been since I’ve had a young, nubile 18-year-old hottie? I’ve never had one. That’s how long it’s been.”

Despite the criticism, those in the church see this as a positive step forward to erase the troubles of the past.

“I likea to get my penis very erect, thena put it betweena the cheecks ova young boy,” Cassius said. “I likea to licka them too. The butthola. Butthola, it tastes so good when it’s ah young. But these ah girls? I don’t likea the girls like I likea the boys. So I ah guess I will probably stop ah the molesting. And I guess I willa have to geta use to thesea new girls since I ah can’t havea no more boys.”

not that I gave a fuck to read beyond the second paragraph, but lets say first impressions last. Your a douchebag. for real. instead of only showing your anger to the church and the priests, show a little decency to the way you depict the victims of a story.