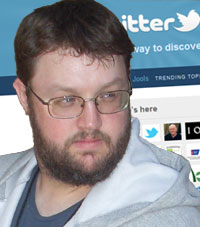 “Do you know how much of a pain in the ass it is to come up with funny shit to post on Twitter all day long?” said Yips. “For every tweet that I make I have to spend hours and hours writing it, refining it, testing it out on my friends and then finally posting it. It’s fucking lame.”

When Yips initially opened his Twitter account he updated his account with several observations, thoughts and statements that weren’t intended to be humorous. Soon Yips found that his followers were complaining about his updates.

“The people on Twitter are fucking retarded. Yeah, I said it! The people on Twitter are fucking retarded,” said Yips. “Initially I was just trying to give my followers and fans some insight into my life and what I think but the dumbshits just complained the whole time about how unfunny I was and how they didn’t get what I was talking about and why was I posting stuff about politics. They even bitched when I would post where I was performing.”

Several months ago, after Yips posted a statement about his disappointment in the way Republicans were pressing for upper-class tax cuts, he lost 103,236 followers in less than 24 hours.

“Yeah, I stopped following (Yips) after he said he liked Obama,” said Kevin Derch. “I started following Yips because I saw him in that movie where he played the funny fat guy but then he started talking about health care and talking shit about Rand Paul so I unfollowed his ass. Comedians should be funny – not political. Leave politics out of comedy man! You don’t see the Blue Collar Comedy guys talking about politics!”

Yips was disappointed with the sudden loss of followers and contemplated making changes to his Twitter updates almost immediately.

“I’m not Ashton Kutcher, so losing that many followers at one time really hurt,” Yips said. “It took me a long time to build up my fan base, and one stupid comment knocked me down a few pegs. But you know what? Fuck those people. They obviously aren’t my real fans anyway. My real fans care about my thoughts on the war in the Middle East, or what I think about the current state of US employment. I can’t, nor would I want to be funny all the time. That would be enough for me to blow my brains out. Like Kurt Cobain. That dude was funny as hell.”

According to several of his followers, Yips should only tell jokes on Twitter and respond often to his fan’s tweets.

“I love all of Yips CDs,” said Sharron Treet. “That’s why I follow him. But I just want to read his jokes. I don’t give a shit about what he thinks or what he had for dinner. Also, I almost stopped following him once because he retweeted a tweet from Justin Bieber. WTF? I hate Justin Bieber so when (Yips) did that I almost stopped following him immediately.”

Yips has tried several things to add variety to his tweets with limited success. In addition to making jokes, Yips has tried posting about food, pictures of cute animals, pictures of himself shirtless, and retweeting other people’s updates.

“Pretty much everything I’ve tried has completely bombed,” Yips said. “So I guess I just gotta stay with what works. As much as it pains me to do it, I just gotta spend all my free time on coming up with Tweets. Nope, I can’t even get high on coke and bang hookers. Don’t have time for that now, gotta tweet. Fucking Twitter followers.”

Yips now spends more than three or four hours for each Tweet he makes.

“I really shouldn’t care about this, but I just can’t help myself,” Yips said. “I need to keep the followers that I still have, and hopefully win back some of the ones that I left. To do that, I have to work my ass off. I’m putting more time into preparing my tweets than I do for my stage act. That’s messed up, man. But if I’m ever gong to get paid to tweet like those Kardashian twats, I gotta do what I gotta do. Tweets and twats… I’m going to have to work on that one. Watch for it in a couple of days when I get it all figured out.”