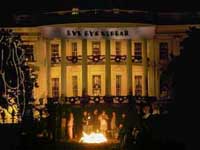 Partygoers stayed on White House grounds until they were forcibly removed by police.
Related Topics

WASHINGTON DC – A going away party at the white house turned ugly last week as officers from the Washington DC Police Department were called in to control already out of hand partygoers around 3 a.m. Wednesday morning. Over 2 million dollars worth of damage was caused and 200 people were arrested with several others ticketed for various offenses.

According to witnesses, the more than 300 people attending President Bill Clinton’s “Blast off for Bubbah” party became “rowdy” after the supply of beer had been depleted and the Karaoke machine broke during a rousing rendition of Fleetwod Mac’s “Don’t Stop Thinking About Tomorrow.”

“We are very sorry it had to come to (police involvement) but the crowd left us no choice,” said Police Commissioner John Davis. “We had received several hundred complaints from neighbors and we had no other choice than to dispatch. After we arrived, Mrs. Clinton herself became more and more aggressive as our officers continued to shun her advances. And really that’s just the beginning. The atmosphere was already starting to turn violent but I think our presence really brought the tension to a boiling point.”

According to witnesses, police officers clashed immediately with the partygoers as several drunk Arkansas Representatives and Senators began throwing empty beer bottles and urinating on the officers from the White House roof. On the other side of the grounds, an unidentified group of rioters tipped over a gazebo and started chanting “Bring on the Bush Girls! We need new Bush!”

Police used teargas and riot gear to repel attacks from the crowd and by early morning the officers had managed to make several arrests and disperse the crowd for good. Pennsylvania Avenue was likened to a battleground strewn with upturned cars, broken windows and women’s underwear.

As the riots began to die down outside, President Clinton reportedly barricaded himself in the Lincoln bedroom holding Alec Baldwin and Kim Bassinger hostage. He yelled at police from behind the locked doors stating he had no intention of ever leaving the house or turning over the presidency to the new president.

“President Clinton proved unwilling to cooperate. Officers tried to break through the barricade but were unable to make any progress. After approximately 4 hours he passed out and a very frightened Mrs. Bassinger was lowered by her husband out the bedroom window to waiting police,” Davis said.

Baldwin then removed the barricade and several officers revived Clinton. Clinton later had to be restrained when he refused to follow police orders and put on a pair of pants. Clinton was admitted to DC General for severe dehydration and alcohol poisoning, but was later released to the care of his daughter.