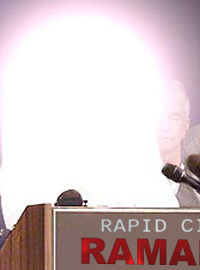 RAPID CITY, SD – During a press conference held at the Rapid City Ramada Inn and Suites, God clarified some misconceptions about his involvement in recent accidents and recoveries.

“There’s been a lot of talk lately on the things that I have, and have not done, and I think it’s time I cleared the air a little,” God said. “People are always riding my ass about this or that, and to be honest, I’m getting sick of it. So I’m here to clear the air – so to speak. I’m not actually going to clean up the air. I’m not here today to answer all of your questions, I’m just trying to clear the air on a couple things.”

“Yeah, let’s talk about that. I had nothing to do with that guy’s recovery. I did, however, have a hand in the accident that put him in the hospital,” said God. “I was the one that told Ed to get drunk and drive home and I was the one that nudged Ed off the road and into the park where Paul was walking his stupid little shitzu. I don’t like Paul that much but that’s not the point. I was responsible for Paul getting hit by the car but I had absolutely nothing to do with his recovery. That was all the doctors and science. Not me. Science is pretty fucking awesome you guys. Seriously. You should really spend more time using science.”

According to God, people often assume God helps people recover from accidents but that is rarely the case.

“I don’t, at least not very often, help people get better,” said God. “I might intervene every once in awhile, but only if I really like the person. But helping people is not really all that interesting to me. What is interesting is finding new ways to try and kill you guys and to test the doctors out there. I’m going to admit this, and I know you’re not going to want to hear this, but it is so much fun just sitting there thinking of totally fucked up things to do to people and then I watch in amazement as the doctors use science to cure or repair people. Seriously, you don’t give enough credit to your doctors. Some of those guys are really fuckin’ impressive.”

Despite God’s assertion that he is not involved in recoveries, local church officials maintain that God routinely intervenes to help those that worship him through difficult recoveries.

“I know what he said, but I think he’s just fooling around,” said Marcy Addison. “I mean just look at me. Last week, I burned my little finger. Oh man, that hurt like a mother fucker. But I prayed and prayed and look at it now, you can barely even see it. Now don’t tell me that God didn’t heal it!”

When asked about Addison’s specific recovery God said “Yeah, that wasn’t me. Neosporin is a pretty good product.”