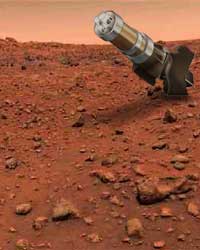 Image from a recent Mars expedition showing what scientists say appears to be a giant laser pointed at Earth.
Related Topics

WASHINGTON, DC – Scientists in Washington, DC made a surprising discovery last month that has forced the world to reconsider its stance on global warming. What the scientist discovered appears to be a giant laser on the surface of Mars pointed directly at earth.

Originally, the group of scientists had been tasked by the United States government to find oil on the planet Mars. After two years of analyzing Martian data and satellite imaging, the team found no evidence of oil but instead found images of a giant laser.

“We believe the imaging speaks for itself,” said Glenn Moder, Federal Research Center. “If you look at this image and you look specifically at this structure, you can plainly see a giant, solar powered laser pointed right at Earth. This has to be the reason behind global warming and proof that global warming is not the fault of us humans.”

The discovery of the reported laser comes just weeks after a world-wide collection of scientists released a report about global warming that in part stated climate change was driven by humans.

Scientists speculate, based on the construction, that the laser is solar powered and is some sort of “heat-ray” that is increasing the temperature of the earth.

“This heat-ray is melting our polar ice caps and raising the temperature of the Earth,” said Senator John Kyle, R-AZ. “We have to take immediate action and blow up Mars. Or at least blow up the laser, but to be sure there aren’t other lasers, we should blow up the whole planet. We already proved there was no oil on it so it really has no use to us anyways.”

In addition to the images of a laser, the scientists believe they have identified a single humanoid residing on Mars that may be responsible for the attack on Earth.

“The existence of the so called ‘alien’ is purely speculation at this point,” Molder said. “In several of the images of the laser there appears to be a short, black creature wearing a roman helmet and a red shirt. None of the images are completely clear though. In some pictures it even as though the creature has some sort of green dog-type thing accompanying him to the site of the laser – the dog is also wearing a Trojan-esque helmet. It just doesn’t make any sense, but it could point to the culprit behind the laser.”

NASA and the US Armed Forces are working together to develop plans to destroy the laser and remove any additional threat.

“Right now, we are looking at sending a group of astronauts to Mars to blow the hell out of the laser,” said NASA chief Martin Davies. “This will be a complete suicide mission, so we’re looking for a group of Astronauts that won’t be missed. That’s why we are trying to train animals to carry out the bombing. Right now we are in the process of getting a rabbit, a duck and a pig up to speed. We think this is America’s best chance to stop this threat but if we have too… there is a hunter that has expressed interest in helping us deal with the situation.”

Even while NASA is planning the mission, the general populace of the US doubts the existence of the laser.

“Dude, this is so completely bullshit,” said Mark Wheeler, 38, from California. “The government thinks that just because there is a ‘laser’ up on Mars that it’s a bad thing. They don’t know. For all we know it’s a giant telescope or a ray that makes hot chicks. We don’t know. We don’t know. Besides, everyone knows that the Democrats made up the whole idea of global warming, so there is no need to jump to conclusions about whether or not there even is a laser.”

NASA and the US Air Force are planning to send more powerful satellites to scan the specific area of the suspected laser within the next couple months.

EMAIL ME BACK I HAVE A PLAN